An electronically enabled she-minstrel traveling relatively light, equipment-wise: a clarinet, an amplifier with a few gizmos, and some small percussion. Build-a-music on the spot. Lighthearted but too rich in timbre and rhythm to be lightweight. Focused, center-of-the head vocal production (think mid-eurasian folk singing). Bravely winning.

Somewhere in the back of James Brown's head is this sound, keeping him honest, chasing him.

Fancy brush-work on the drums. Check it out.

Deeply back-cross-mixed influences. Syncretism upon and within syncretism.

In 1984 I bought a used Wurlitzer Funmaker Sprite in Greenwood for $200. What sold it for me was that you could play all the push-button rhythms at once, and slow them way way down. Here the effect of the mechanical rhythms is not to set a tempo but to delineate exactly in what wise there is no such thing. The other beauty of the Sprite much on display here is that  not a single sound that can be made on it is in good taste. It is all and throughout rich cheap crudiness. We got a lot of use out of it, and its wonders are amply documented. Currently it is being slowly reborn into an entirely new device.

The ironic '80s counterpart to the psychedelic '60s sincerity.

Posted by Keith Eisenbrey at 2:18 PM No comments:

For those who did not come up through the vernacular, or who listen as though they had not come up through the vernacular, the gestures that are merely neutral to those who did, pop out. This music is both completely stable and ready to slide off into a heap on the floor, like a pile of books on a graduate student's coffee table.

A lovely session - the link is to the sound on soundcloud. Navigating the balance of sounding like music but not going like music.

In light of the recently completed Seattle Improvised Music Festival, which I heard and enjoyed a little of, and also of the many thought-provoking essays in Wally Shoup's Adventures in Music, I have been thinking of the claims made for improvisation as an activity, and of the social aesthetics that often adhere to its practice. No conclusions of course - How could there be? - but a question I find in a talk given by Warren Burt at Bard back in 1984, as reported in News of Music, [February 1984] "Can one ask one's own language to remove itself in its own terms?"

Posted by Keith Eisenbrey at 9:54 AM No comments:

A semi-amateur variety show to fund the replacement of an 80 year old stove. All acquitted themselves admirably. My wife's band, Your Mother Should Know, played a stripped-down unplugged set. The Raindrop Quartet really are that young, but they are lots of fun, quite capable, and carry themselves scary well. They bear watching.


Tiny edge of intent dark or dim
Empty environs vacant hive
Squatters seep
Note's incipits
Tactile heft blasting
Hushed long still line
Whale Song if X sang Whale Song where X is invisible if hidden blatant if frightened porous if soft brilliant if cornered pungent if ripe bickerous if baffled
(distant shelling) (battle of the boojum)
Snark Song if X sang Snark Song where X is
Jub of the Crycry
Thoughts I might have had about the socioaesthetics of free improv blown away by the engaging spectacle of that 12 foot long sax.

Manhandling his guitar as though it were a toy ukelele.

Is it just me, or does this edge toward what would in a later age be hip hop?

One More Chance - Fairport Convention [from Meet On The Ledge: The Classic Years (1967-1975)]
Monkeys - Echo And The Bunnymen [collected from Nancy's Mix]

There are few musics where the disconnect between ostensible subject matter and apparent affect is so strangely askew. This may be, at last, a toe-hold into Verdi for me. I'll keep you posted.

I didn't try to keep track of who all played, but there were a bunch. Here is a link to a gallery of each individual doodle I made (they look best big, so watch the slide show), and below is the whole page. If you played you are free to guess which one was done while you were playing. I can't remember, and they weren't made in left-to-right top-to-bottom order. 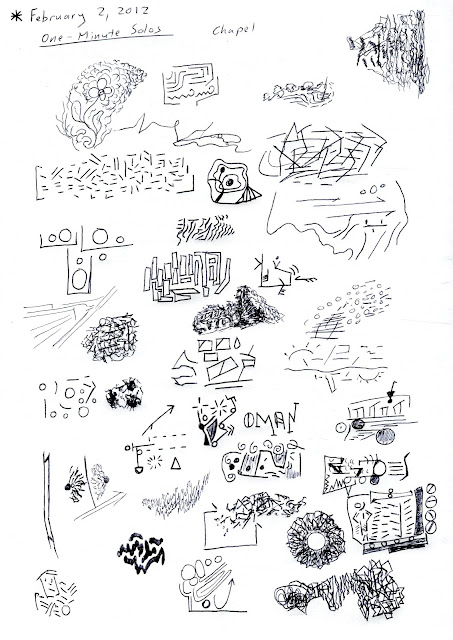 See post last week for Wild Thing 1, but with echo.

A song is (can be) a clear statement of text as set apart from conversational modes.

This was the recording from my recital of June 2010. As a performer one accretes a sense of what a piece is from a standpoint that is both privileged and distracted. On the one hand all its details, all its structure, are baldly present. On the other hand the performer is so busy attending to the physical details and to the projection that it is a delight to step back, after time has passed, and listen for how a piece hangs in the audiosphere. All to say that, listening now, each of these six pieces is precisely distinct and unlike anything else, even its fellows - except that they are also exactly like each other in a way that seems unlike any other way that sets of pieces are ever like each other. Imagine six of the oddest people you had ever met - and then to discover years later that they were brothers.