Whatever else this might be it is certainly among the poster children for works best left to the hopelessly scholastic. In performance the incessant quick patter is numbing rather than amusing (the cloying rats don't help) and then there isn't much of a fairy tale left in the fairy tale: no crystal dancing-shoes, no pumpkin-carriage, no coachmen, no fairy godmother and no evil stepmother (good feminine vs bad feminine). What's left is another tedious story about inherited wealth. And the music is dull to boot. Why is this staged? To lure children to the opera? It seems it would come across as bait and switch. "But Mom! I thought you said this was Cinderella?"

The overriding strength of the work of John Cage, among the webs of thought that concern each of the above, is its strenuous engagement with the issues of its own epistemological status. Neal has taken these scores as an opportunity to work out, in performance, a constellation of ideas about Cage and Joyce, both through Cage's artifacts relating to Joyce, and also through his own thinking about Joyce in general, and about Finnegans Wake in particular, as a thing to perform. Ages ago, when Neal was living in San Diego, he memorized a large chunk of the first chapter and performed it several times. I was fortunate enough to be in attendance at one such performance: in a cabin at Flag Ranch, on the Snake River just south of Yellowstone National Park. I still have the tape. This night's amazing performance has been a long time cooking.

Nobody does aural soft-porn with quite the dewy-eyed innocence the Fleetwoods manage. That's thin ice, kids. Take care!

An idea for a song. It would have been pretty good for nearly anybody else, but Bruce should have tossed it or finished it. As always, the E-Street Band's performance is full on. 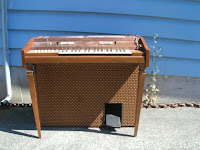 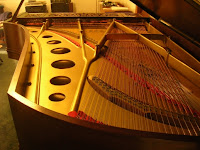 I wrote this piece in 1985 for my Wurlitzer Funmaker Sprite electronic organ, and performed it several times (under a different title) as part of Banned Rehearsal's Three Compositions No Breaks. A few years ago I recorded it on my piano. You can listen (while I keep it) on my Soundcloud site here. It is a procession of tokens of the direst moments of mock early expressionistic angstism. It's kind of fun to play.

Posted by Keith Eisenbrey at 2:49 PM No comments:

The genius of Banned Rehearsal, when it is working, is not geared toward brilliant performance, but consists in a focusing in upon specificities of sound. This session begins with a transparent 'combo' vibe with drums, cornet, piano, and tub bass, then transforms itself into a study of the texture of drumheads, bells, and cymbals. Listen on my soundcloud site. I'll keep it there for a while.

If J. K. Randall is a self-proclaimed pitch freak, then S. L. Weiss must be a figuration-pattern freak. In this I recognize, aspirationally, a kindred spirit.

Step to one side and it's The Beatles, to the other and it's Queen, with extra reverb.

I wonder if the harsh engineering was designed with the presumed sub-standard listening devices of the target audience in mind, rather than those of the hi-fi crowd.

It had been a while since Neal came over and played A's, so he played lots of them and strongly.

Music for solo piano
Eisenbrey: Welcome to my planet. I come in peace.
Meyer: Cage - Solo for Piano
Posted by Keith Eisenbrey at 2:01 PM No comments:

When Santa's out his workshop works into a roilsome party of drums and tam tam.

If one were clever and patient with midi I suppose something could be done beyond producing the bare idea of a score. I tried out 4 different patches (clarinet, two guitars, and violin) whose real-instrument counterparts share qualities the piece needs in order to function: a large pitch range, a large dynamic range, and a shift in color from one end of the pitch range to another. That said, the piece was really designed for clarinet and it would surprise me greatly (and please me greatly) if it were possible to play on guitar or violin. The problem with the clarinet patch is that to a certain extent the dynamic levels produce a sense of proximity rather than strength of tone. The acoustic guitar patch seems to have a different size guitar body for each pitch. Both the acoustic guitar and violin patches don't even try to model open string resonance and the electric guitar patch was spitty and monochromatic. An interesting experiment for me as composer, but not a successful one.

Saturday May 4, 2013 at 8:00 PM
Keith Eisenbrey and Neal Meyer at The Chapel Performance Space, Good Shepherd Center, Seattle
Music for solo piano:
Eisenbrey: Welcome to my planet. I come in peace.
Meyer: Cage - Solo for Piano
Posted by Keith Eisenbrey at 4:02 PM No comments:

My 1980 Latin setting of the Peacable Kingdom passage from Isaiah. I was a student at the UW at the time and composed by hurling conceptual ideas at score paper to see what they would do. In this case I used quotations (a Schubert Waltz, I think), abrupt jump cuts between disparate textures, and directed improvisation, among other things. The whole thing ends up pretty much a mess, but my intrepid and phenomenally pitch-perfect soprano soldiered on admirably.

Aaron and Neal may have been acquainted before this, but to best of my recollection this performance was the first time I worked directly with any of the members of what would, four years later, become Banned Rehearsal. I remember they were difficult to play and they sure sound like it even at this distance.

Listless, passive, achromatic. It is difficult to tell whether it is mostly our fault or mostly the fault of the recording system. Now and then a session simply falls flat on its face and that's that. That's this.

Saturday May 4, 2013 at 8:00 PM
Keith Eisenbrey and Neal Meyer at The Chapel Performance Space, Good Shepherd Center, Seattle
Music for solo piano:
Eisenbrey: Welcome to my planet. I come in peace.
Meyer: Cage - Solo for Piano
Posted by Keith Eisenbrey at 4:00 PM No comments: