We were so earnest! But I like the fancy guitar work here and there and the arrangements hit pretty well about half the time. For me the strongest cuts are Blessed (if for nothing other than the line "blessed is the church service / makes me nervous"), Kathy's Song, Anji, April Come She Will, and We've Got a Groovey Thing Goin'. Who spells 'groovy' that way?

Get Back to Toronto - The Beatles 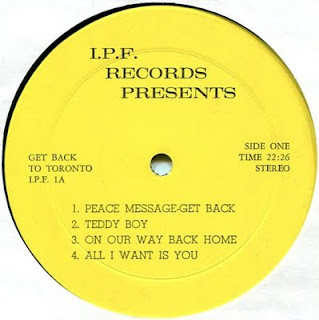 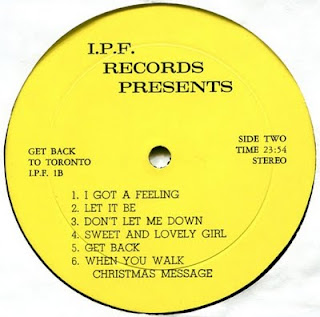 In the '80s at Bard the synth of choice was the Crumar, which in my head for some reason is always spelled with a K. This 20 minute solo session trots out the sound in all its shaggy glory.

Participants: Keith Eisenbrey, Anna K, Aaron Keyt, and Neal Meyer. A short exquisitely gentle session from early in 1985. After our first live performance we experimented with forms of framing other than our usual practice of playing until the tape ran out. I'm guessing we were thinking that if we were to play again in public it might behoove us to do shorter bits.

This was the last of my takes from February 2002, and by far the most solid. Here is another of Karen's fine illuminations from the score. At the end of Act I Hero Cat falls asleep. He doesn't re-awaken until the very end of Act III - though he has an active mid-nap life.

When Banned Rehearsal was at its most geographically diffuse, Karen and I would often make tapes together as Assembly Rechoired. The name and sequence of numbers continued and now constitutes all those sessions in which Karen & I participated but in which neither Aaron nor Neal was present. This session was from April of 2000. Karen & I are joined by our son John (who was 9 at the time) and our frequent guest and neighbor Pete Comley. The session increases like a huge leaky silk balloon slowly failing to be filling from supine quiet.

A lovely session. Thinking about aspects of John Cage as attempts to abstract the concrete out from within the rhetorics of musical abstraction. Never have the several A-naturals felt so alien to each other.
Posted by Keith Eisenbrey at 2:43 PM No comments:

My index shows the participants to have been Karen, Aaron, and myself, but I'm not sure Anna and Neal weren't there as well judging from some of the sounds. This session, though often wonderful and getting to a lovely peaceful plane at the close, brings up one of the perennial discussion points that makes Banned Rehearsal such a lively argument (and I admit to framing that discussion point to skew): Is falling into a groove, even when it feels good, likely to lead us somewhere unexpected and unexplored, or is it a retreat to the familiar and the known? From my standpoint the other side of this argument comes across as: What have you got against music? For me, in the context of improvisation especially, but for that matter in a more global compositional sense also, it isn't music as such I have a problem with, it is the known, the too easy, the facile, and the clever. All of these things tend to blind us to more strenuous possibilities.

Two distinct parts: the first clattery and the second luminous and pretty.

Part of a midi-enabled music analytical experiment based on Scriabin's Prelude op.74#4. If a piece of music is considered to be based on or derived from a certain pitch set, then it would be interesting to find a way to hear exactly how that pitch set and its transformations sit within the rhythm-scape of the piece. If we were to analyze a piece of music as being "in C-Major", for instance, then we could play through the piece but only play the notes within the C-Major triad. One could then make different versions using each different triad, differentiating them by timbre, and also combining them together in sets. One set might be the C-Major and G-Major triads , to hear how the Tonic and Dominant harmonies interact. Each set or combination of sets would be a unique abstraction or analysis of the piece. This is essentially the idea I was using in Extracts, though I thought Scriabin's Prelude might better be analyzed as being based on the (0,3,4,7)-type tetrachord (C-natural, E-flat, E-natural, G-natural is one transposition). I made one version of 12 runs through the prelude, once on each transposition. Then I made eleven more to combine all the possibilities of combinations of bi-tetra-chordal sets in all their transpositions.

Ends as a completely different song than what it starts out being.

I Can't Believe That You're In Love With Me - Roy Eldridge [from The Smithsonian Collection of Classic Jazz]
Aviary - Charlie Mariano [from Allen Lowe's That Devilin' Tune]
I'm Left, You're Right, She's Gone (slow version) - Elvis Presley [from Sunrise]
Bye Bye Johnny - Chuck Berry [from The Best of Chuck Berry]

August 17, 2011
Your Mother Should Know - recording Ask Your Question at the Tintinabulary, Seattle

Your Mother Should Know is a two-piece rock and roll band made up of Neal Meyer (vocal, guitar, and bass), and Karen Eisenbrey (drums). This is their first attempt to record a song, and my first attempt at multi-track recording of amplified sound. Due to time and equipment constraints, we are going about it in an other-than-standard method. First I had them play it together for a guide-track. Then we recorded the drums separately, followed by guitar, vocals, and finally bass. I'll be spending some time mixing the tracks, but hope to have a listenable version in a couple of weeks.
Posted by Keith Eisenbrey at 6:50 PM No comments:

Full of mid and off rhymes, this is what Joey Ramone wanted to sound like, if he'd had more range. The introduction to Dirt is brilliantly composed, each instrument sliding in from where it always was. 1970 has the roll part of rock&roll in spades. The rhythm section is uncannily both dirt-basic and absolutely distinctive at once. Listening to both discs all together may a bit much, but this is pretty interesting stuff.

Neal rehearses for the gig on Friday, with three rungs.

The principal Bess, Lisa Daltirus, was ill, so we had a replacement: Donita Volkwijn. She did splendidly. I have no complaints whatsoever. I love all the ensemble stuff. This is what big productions are for.

Tom discussed his soon-to-be-released recording of Hunger: The Journey of Tamsen Donner.

Gradus: for Fux, Tesla, and Milo the Wrestler - Neal Meyer 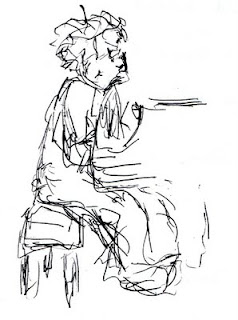 Actively serious in a way that little else is. Maximal minimalism. Transformation is the quest, but it isn't principally our transformation he is after, it is his. Actually tangential to music rather than simply evoking the pretense of tangentiousness. We are afforded an opportunity to hear and think our own voices, our own heads, and our own species. We make a dull roar. Out aloud allowed in out loud. The freeway crescendo throughout - a great gooey mass from which is occasionally extruded a temporary particularity. And through it all Neal persists.
Posted by Keith Eisenbrey at 12:39 PM No comments:

This is among the richest and most affecting oratorios I know. It is also one of the very few times in which an iconic American high-art (to the extent that Whitman is high-art exactly) text has been set successfully on such a grand scale. Here there is no cringe-worthy patriotic piety, no cloying ironic wink. Instead we have the cumulus rhythms of Whitman's images, flowers and bird calls, transfigured keens. All that and the alto solo is to die for.

Take one, recorded on 2/19/1992. These are probably more useful as examples of how I was thinking of the phrasing and tempi than as fodder for editing.

There is some confusion in my records as to who was actually on this session. It was some grouping of Isaac (as a toddler), Karen, myself, Aaron, Anna and Neal. It is a study in background. The sounds that step forward in the mix do so only to add a particular spice to the main show already humming in the room.

Improvising with Mike is like an encounter with a large sentient hamster. This was at Gallery 1412.

Part of a midi-enabled study of Scriabin's Prelude op.74#4. See my post of 1/29/2011 for an explanation. By treating each pitch-instance as structural fact, each becomes a structural image, and more vibrantly than I would have expected.

August 4, 2011
Down and Out Blues - Louis Forbstein's Royal Syncopaters [from Allen Lowe's That Devilin' Tune]

Part of what makes Mr. Lowe's collection so fabulous is that it strings together so many interesting ways that recorded sound has sounded. In this cut from 1925 the rhythm section can barely be heard, but it sure makes its presence known.

Simple and square, not a note that couldn't be captured on the recording equipment and heard at the end of the production line. Clearly the pros had learned how to do it.

Between The Devil . . . - Teddy Wilson [from Allen Lowe's That Devilin' Tune]

Smooth sax choir with an edge of trumpet.

Leave it to Jim to call into question the very notion of apt-ness. On the surface these are flat-footed midi-realized (I think) studies that sound like scraps from Arthur Berger's desk that have been thinking themselves over for awhile. But everything about them is off kilter - the dynamic range (too big), the instruments (too ordinary and too raw), the mix (too bald), etc. In short, completely fascinating.

Participants: Karen, Myself, Steve Kennedy, Aaron Keyt, and Neal Meyer. Playing with some new noisemakers: a cast-iron skillet from Ellensburg, and a milk-can from Prosser. Aaron brought some rude-ophones.
Posted by Keith Eisenbrey at 1:45 PM No comments: