A tight knot of rhythmthink, for which the text is mere platform.


A clot of 1965 came up in my listening Thursday evening, but I was unaware that Fontella Bass had passed away just the day before. Among these songs I would point out the exquisite patterning with which the vocal parts share the vocal lines in People Get Ready; how petty and ill-tempered Dylan sounds in this company; the fiery rhythm section behind Fontella, Sam Cooke's message from the pulpit paired with The Guess Who's report from the floor; and moving from delight to delight to the Dells' deeply composed arrangement of the final repetitions of Stay . . . Stay . . . Stay.

Saturday May 4, 2013 at 8:00 PM
Keith Eisenbrey and Neal Meyer at The Chapel Performance Space, Good Shepherd Center, Seattle
Music for solo piano:
Eisenbrey: Welcome to my planet. I come in peace.
Meyer: Cage - Solo for Piano
Posted by Keith Eisenbrey at 2:18 PM No comments:


(we have retreated to our den)
dormant dubious sub-wharf flotsam

On the evening of December 13, 2007, at the Chapel Performance Space in Seattle, Sean Osborn proved beyond doubt that he is superhuman. The uncut version of Chaconne is frankly impossible for one clarinetist to play - by the time the end is reached, 20 minutes in, there would not be enough lip left to remember what a high note is, much less to nail them pianissimo. But even with the cuts Sean and I had settled on, with the risk of disaster being nearly total, he negotiated the score with both a technical brilliance and a musical understanding that had my jaw hanging loose. And at the end, 15 minutes in, he laid those last long high quiet notes out sweet as slumber. This performance was among the three or four most gratifying performance experiences of my compositional life.

My intent was to write a solo clarinet piece that would have a similar heft and gravitas as Bach's solo violin chaconne. It may not be exactly that, but I'm still pretty pleased with it. The particular chaconnity of my Chaconne is twisted. I doubt I could untangle it myself anymore. I believe it involved progressively complete iterations of rotational arrays of a six or seven note row within a mod-17 pitch class system. Now if only there were two Sean Osborns to play as a tag team perhaps a performance of the uncut version could be staged!

Gradus provides ample time to parse listening practice. There is a temptation to dissect each tone, to slice it into horizontally thin specimens for microscopic examination, the presumption being that in order to hear what is actually there we must hear each tone as the concatenation of its partials. Is resistance futile? Or, when careful application of dampers reveal a new sound from within the old, could we hear it not as parts of the old now revealed but rather as a new episode of the old, relating the old and new more as we would the respective incoming and outgoing sounds of a dopplered automobile, or perhaps as the trajectory of a diphthong? Or as both at once?

Music for solo piano
Eisenbrey: Welcome to my planet. I come in peace.
Meyer: Cage - Solo for Piano


Posted by Keith Eisenbrey at 10:36 AM No comments:

I was proud of Neal for the clarity of this presentation, placing his mega project within some of the broader aesthetic conversations in which it takes its part - with Cage, with Dempster, with Boretz, with Randall, with Taylor - and also within that more intimate familial conversation it has with aspects of my own work. And though Gradus for Fux, Tesla, and Milo the Wrestler is without question sui generis, and could even serve as an index point for what counts as sui generis, its nature is conversational. It is without progenitors, but it is not without interlocutors, and in the nitty gritty of the doing of it it is not without its own internal interloculations. It is the harmonics conversing with each other, it is the strings conversing with the soundboard, it is the sound of the piano conversing with the sound of ambience, it is all of that conversing with his, and with our, sense of music, of composition, of listening, and of thinking.

During the Q&A at the end a question came about how Neal manages to reconcile his love and admiration for this deeply odd and largely very quiet music with his equal L&A for Rock-n-Roll and its associated cloud of genres of not so quiet music. Although I thought this question was essentially like asking Neal "How are you Neal?" in another sense it was directly on point - How can an integral personality converse both within and among itself and also with others?

It is salutary on occasion to step into uncontrollable situations, partly because it forces assumptive questions. I am as aware as anyone that my deep rut default notion of a social situation conducive to music, or at least to my music, is one of quiet attention. At its worst of course this can be as coercive as "shut up and listen", but my hope is always that I have something to say that is as worth listening to as are those things that I have heard and been moved by.

And so to find myself in the assigned role of 'co-improviser' at a lively party, full of kids and folks chatting amiably, in a room full of pianos, was alternately frustrating and rewarding for me on several levels. First, it was difficult to hear even what I was doing, and more so what my colleagues were up to. So I spent quite a bit of time trying to discover what could be done that would be audible, that would be a valid part of the experience for myself and others, and that would, perhaps, actually engage with some outside our trio. This is not an easy compositional task, and success at it is difficult to judge - to the point where I still don't know whether it did or not.

It is interesting that both of the pieces that came up for listening this week set up fields of stark dualities, and work out their interactions. In this improvisation Ben and Jill each take a channel and a small lexicon of words and instrumental sounds. Left, right. Ben, Jill. Voiced, unvoiced. Monochord, fingercymbal. Hiss, breath. Drum, mouth.

Bowed, struck. Undulous constellations in near statis osmosing through the possibilities of their mutual membranes.

Music for solo piano
Eisenbrey: Welcome to my planet. I come in peace.
Meyer: Cage - Solo for Piano
Posted by Keith Eisenbrey at 2:37 PM No comments: 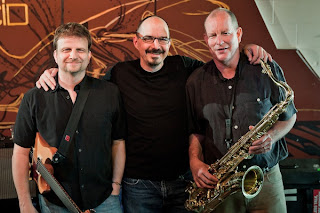 What Strauss does when Strauss is really doing what Strauss does is to cobble together parts that do not fit together exactly quite so that they just manage to stay put long enough to get to the next set of ill-fitting parts narrowly avoiding collapse. Rarely does he manage to keep this going for a whole piece, but there are sections of Till that delight.

I really want to see this guy play guitar. It sounds like he has extra bass strings - or even an extra soundbox - for the low ringing strums, while the upper intricacies flit by like tiny bats.

This Song of Love - the Middle Georgia Singing Convention No. 1 [from Harry Smith's Anthology of American Folk Music]

These guys blend like a woodwind quintet - with tuba added.

JB's vocal is not the biggest sound in the mix, but the horn hits are so sparely used that any more would be engineering overkill.

Music for solo piano
Eisenbrey: Welcome to my planet. I come in peace.
Meyer: Cage - Solo for Piano
Posted by Keith Eisenbrey at 10:22 AM No comments:

An interesting thing is that in the movements of these concerti the play of balanced answering phrases is not the default method of unification. Here, often, subsequent phrases echo or amplify, veer or renew. When they do answer and balance, they do so with a vengeance.

The headphrase provides a handle to which all else attaches, a hub, a stable configuration. The text for glossing.

There is some intensely complex music here, especially the opening chorus.

Expressive, but not dramatic.

The introduction to this set of bucolic dance-y songs is devastatingly beautiful.

It may have something to do with how a late baroque sense of what can count as music fits itself onto the exigencies of the lute, but there is something about how the melodies hang within the figuration that reminds me of much older music, Machaut perhaps.

In number 104 the slow introduction is a way of setting up goal posts and corners on the field within which the tonality is then to play. Once the movement proper begins the introduction vanishes. In 103 the introduction becomes part of a much crazier, Romantic idea, turning the entire movement, and thereby the symphony inside out. For some reason I wrote in my notebook that "2nd movement is like breakfast" but I can't remember why.

Serkin is generous with clarity, almost to a fault.

Music for solo piano
Eisenbrey: Welcome to my planet. I come in peace.
Meyer: Cage - Solo for Piano
Posted by Keith Eisenbrey at 3:19 PM No comments: