After a spectacular dinner in the garden at Poppy, Karen and I spiral skirted the Capital Hill Block Party (just keep the boomboom in one ear at a constant volume) to a narrow high-ceilinged space with graphics on the walls and a bar in the back. We caught just the end of the last song by the previous band, whose name I didn't hear clearly.

There were some unfortunate technical problems - a bad hum persisted right up to the last couple of songs, and the vocal amplification was apparently not up to the task at hand - but I suppose that is the danger of electronic gear piled higher & deeper coupled with limited time to get it all working properly. Nevertheless, the close walls and the long spaces overhead and behind gave the drum sound a lively tunnel reverb, warping the higher frequency amplified sounds quite nicely into the cymbals splashy woof, and though the vocals were not optimally up front there was something unnerving about their presence beneath the tapestral sough - as though a dragon moved unseen.

I was thinking about the pre-conscious or liminal-conscious psychoacoustic faculties by which we integrate and segregate and otherwise sort out signal into distinct singularities or sets or complexes of sounds, and how we then project or reify or otherwise create agents and instruments to have made them.

Neal and Aaron slam each other against the wall with pianos.

And Are We Yet Alive?, the hymn sung every year at annual conference by the assembled United Methodist clergyfolk, speaks to those times in life when you realize that an ordeal has been survived and that you are wounded but healing, stronger and aware. For many, their 20s are such an ordeal, and finding yourself at the other end more completely adult is a grace and a glory. The stage this night was crowded with superb musicians, sharing with each other and with us their triumphs and tales.

I'm a sucker for finger-picking she-minstrels, and Courtney delivers all the musts of the type: wise, ingenuous, vulnerable, shy but comfortable enough in her own skin and voice to rival the presence of her awfully pretty guitar.

Mike and Matt Gervais are well known as the manic-happy front men of Curtains For You, and in previous guise as the engine behind True Bugs. It isn't surprising that they have now ventured off on their own with a superbly able crew lifted partly from the Seattle Rock Orchestra, and held in place by Faustine Hudson, perhaps the most melodically capable of Seattle rock drummers. One band is just not enough to hold this volume of creative energy. 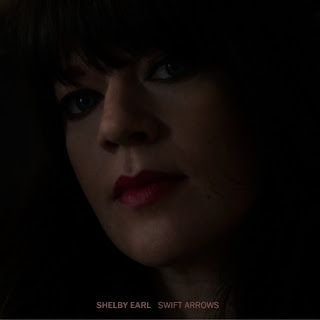 Shelby pulls out all the stops - a perfectly attuned band, a wonderful venue, charismatic charm - and tries every trick in the book - songwriting chops beyond comparison and a jazz chanteuse's knack for hanging off unsuspected corners and lingering in newly discovered crannies of the beat - but there is really no hope. That voice will win.

A rehearsal for that very evening's concert. Opacity of a howling blizzard. Neal's sister Karen was our test audience, before she and I became an item.

Our second live performance, at Brechemin Auditorium, School of Music, University of Washington, Seattle. Neal was a TA at the time, and the audience was beefed up with students from his theory classes.

An overabundant overlay of Funmaker fills the nooks and clogs the crannies. Un-poke-able.

Neal couldn't come over for Gradus, so I decided to practice tuning the guitar that my brother gave me - his first successful hand-made Fox Spit. Then I made this recording.
Posted by Keith Eisenbrey at 9:11 AM No comments:

I will never accustom myself to the waiting for a dive-bar show to begin. I know that when the start time is 8pm they really mean "sometime after 9 but probably before 10", but since I'm the kind of guy who always gets places early I end up with a lot of time to observe.

Everybody nods in exactly the same way when asked to present their ID. No matter the quantity of leather goods, studs, piercings, or tattoos, the vast majority of folks are polite and courteous. Being in a place with constant loud sound is a little bit, I imagine, like being temporarily deaf.

Rock music is a music of and for people in transition. Youth to adult, single to connected, connected one-wise to connected (or un-) another-wise, there to here, then to now. Its energy is overlarge because the feeling of living in or through transition is over-wrought, juiced. It wants to be heard on both sides of the boundary, but it also wants to expand and prolong its own moment - as reluctant to move forward as it is desperate to efface its past. Hyperphoria can blind and paralyze, but it is essential for self-aware growth.

Ian "Old Man" Williamson played a short, spirited, acoustic set just a notch louder than the general din. Pouch gets more solid each time out, though the PA system for the vocals wasn't up to their rip-it-up instrumental wallop. YMSK mixed up their sound, with Neal and Karen sharing vocals, and Neal switching from keyboard to 6-string to 12-string. Their set is defiantly varied in affect. But of course it was Peterman's show and they are ripening into a high energy, roots-punk, feel-good act. My favorite moment of the whole evening was during their cover of I Can't Help Falling In Love With You watching two burly logger types giving each other an exuberant and heartfelt bro-bear-hug.


fold over and in, like kneading bread, or forging sword
dissociation of conjointure
etched upon
a gouged surface through a scribbled screen
not softened
removed

When an improvisation is just not working the best option is usually to stick with it. The point is not to redeem the session as a session, but rather the hope that eventually things will fall into an interesting place, even if just for a moment. This tape is a case in point. Mostly horrible, but now and then pretty amazing.

I put this one up on my soundcloud site because it was as lovely throughout as the evening was pleasant. We played on the porch for the passersby on the street. Enjoy!
Posted by Keith Eisenbrey at 4:58 PM No comments: 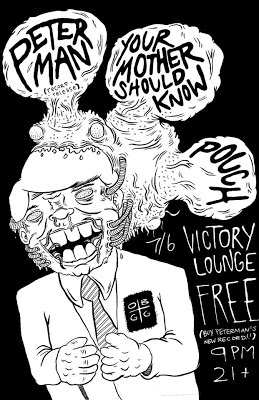 I pulled host duty at this bi-month's salon, so I'm sure I was somewhat distracted. Nobody can replace Tom Baker. I was however both surprised and pleased (but mostly pleased) by the large turnout, and by the lively discussion that followed each performance. Carson explored a unification of musical parameters in a personal, transparent, intriguingly flat-footed, non-Stockhausenish way. Kam brought four delightful piano pieces written for a puppet show that never materialized, and two ambitious songs for bass and piano whose poems concern the interaction of man and animal - moose and magpie, respectively. Neal's musical comedy pastiche songs are familiar to me, as his chanteuse is none other than my lovely spouse Karen, who was fab. For what it's worth, here is my theory of musical comedy: the more the songs are ascendant, the better; the more the book is ascendant, the worse. Best possible solution: all songs, no book.

July 2, 2013
Banned Rehearsal 41 - (July 1985, Keith Eisenbrey, Anna K, Aaron Keyt, Neal Meyer)
﻿﻿
On the 4th of July weekend of 1984 the three then extant members of the band - Aaron, Neal, and me - utterly failed to make a tape that came to be known as Banned Rehearsal 5. The tape was in the recorder, and the plan was to walk out into the ebb tide mudflats at the end of Holmes Harbor on Whidbey Island, to record our squeechy squoochy footsteps, the lapping waves, the wind, and the birds. Unfortunately, either the batteries were dead or they fell out at the outset, so there was no trace on magnetic tape of what we all remember as the spectacular one that got away.

The compressed omnipresent rumble of wind in the microphones is like the sound of boulders in a swift river, complicating water.

Detail phantasms by, not yet sunk into the tarry mass that waits. Not a wall of sound, but rather a thicket, emerging from ground into which we succumb.

﻿﻿﻿﻿
Another milestone, or the other side of the same milestone as last session. Having finished all the combinations of the A-naturals, Neal plays the first E-natural. The moment was captured visually as well as in sound-file format. Since he has been treating each 40 minute recording session as two 20 minute rungs, the second half was a perhaps even more momentous occasion: the first Gradus in which two pitch-classes appear.
Posted by Keith Eisenbrey at 1:57 PM No comments: