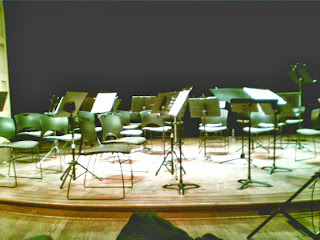 I waited a week to write about this, and I'm still not sure what to say. Perhaps puzzlement is close to being a correct assessment. I have been familiar with Group Variations for decades, but a firm grasp of it persistently eludes. Richardson's video makes no particular attempt to track or mimic the music a la Fantasia, (thank you), but perhaps rather imagines a visual shifting in one's chair and a cocking of one's ears. We don't see the music, but the listener.

A song can be just what one would say.

My teacher Ken Benshoof once suggested that jazz musicians don't habitually play in keys so much as from them. Something like that is going on here, but the operative notion might be described as a nested metrical/phraseological norm, teasingly suggested precisely in order not to quite comfortably settle into.

I kept thinking of how this music would come across played on a keyboard rather than a lute. The primary distinction would be the relative loss of presence of the body of the performer. The modern keyboard, be it harpsichord, fortepiano, or piano, is designed in part to be transparent, to vanish with its operator as an object in the room, so as to allow an unmediated musical experience. In that sense it is designed with a systemic lack of candor. Of course it mostly fails at this, and often it is the dynamic subtleties of failure that provide the human scale with which we can wrestle with the musical experience. But the lute is a much older animal and these intricate contrapuntal musics don't set upon it with quite the same hard-wired ease. Here the performer is an inescapable bodily presence, tooth and claw.

Transcends by expanding within.

A salacious come-on so baldly disguised as to be more blatant than if it were straight out.

Enjoy! Link above to my soundcloud site.

Neal was busy so I improvised on my brother Paul's handmade guitar. 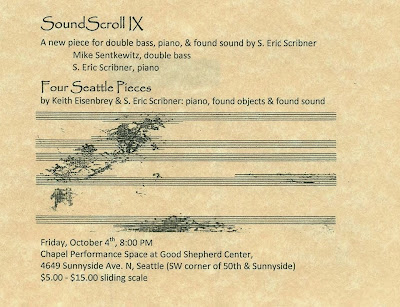 By way of full disclosure, Siri is a cousin of mine. We share great-grandparents on our respective mother's sides. Karen and I were on Whidbey to visit my folks and took the opportunity to catch Siri and Steve's act at a cozy winery in Langley.

Technically I suppose they are a cover band that throws some original material in occasionally. But they are up to more than simply playing familiar songs, from The 59th Street Bridge Song to Summertime and back again by way of Jimi Hendrix and The Beatles, and more than simply performing them quite ably (though they certainly do). Using the familiar as a springboard they are working out the sound of an oddly nice instrumental duo: amplified cello and electric guitar - four low strings tuned in fifths, and six treble strings tuned (mostly) in fourths. The mix of open sonorities was quite fine, their colors allowing ample aural space for rhythms to slip across the horizontal, delightfully askew but always clear. Their balance was impeccable, and what lovely guitars Steve has!

Using whatever happened to be on the radio or TV as an accompaniment, Aaron knocks two sudden songs out of the park. This Bus Won't Stop For Me gets picked up in later sessions by Neal, who gives it a more aggressive feel than Aaron's original insinuance, which gains a particular discord with the British laugh-track comedy in the background. Clara With the Feet of Snow is simply lovely, and probably impossible to duplicate. The backing was some late-night smooth jazz station. That sax player never had it so good. 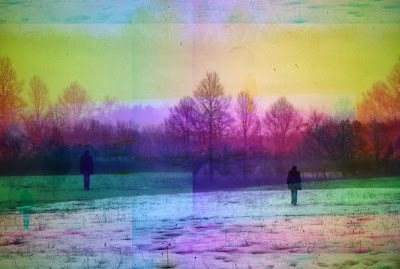 This was the last of my solo sudden songs. I was exploring the possibilities of clear metrical feel within an expansively flexible beat. It features what is probably the most psychedelic of my lyrics.

I don't remember exactly how we were arranging the electronics, but we had turned the next room into some sort of reverb chamber. It hovers just underneath feedback most of the time. 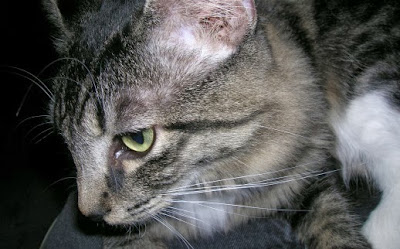 I finished this 'little opera for solo piano' in 1990, thinking that surely some better pianist than I would see how much fun it is and go out to make it and them famous. It's been 23 years and no takers so far. The score is available on my website here. It's worth a look just for Karen's illuminations. I've always felt it is just a bit over my pianistic abilities, but learning it and re-learning it has pushed me to get better. This is the edited version of a long recording session made during my vacation last April.

I was interested in the mechanics of how music can be made to tell a particular story, but I could not imagine enduring the hassle of realizing a full operatic production with stage and singers. My solution was to include within a solo score all the trappings of Wagnerian narrative, and make the story explicit by means of a narrator - somewhat like Peter and the Wolf, or Oedipus Rex. It has been performed in that version twice, and now that I have learned it again I hope to find a suitable narrator and do it again very soon.

Two Audiofilms made for use at Steve Scribner's upcoming concert.

Posted by Keith Eisenbrey at 5:27 PM No comments:

a tour of the living space

National Geographic: Magyar Mirth and Melancholy 1938 (scary times)
his calendar: interesting dates on it like . . .
December 22, 1985

I was thinking about the nature of sung words, and of what singing does to the sounds of words. The working hypothesis was that to sing a word is to mis-pronounce it and by deliberately making it sound different than typically heard deflect our perception from its language-token existence toward its sound-token existence, allowing us to understand it as both a part of music and an act of language. So I was using my texts from Book of Windows and mispronouncing them toward music.

The four parts of Banned Telepath 4 mooshed together. I was interested to discover that my own contribution, so clearly focused on song and music in a somewhat ordinary sense, loses many of its salient particularities in conjunction with my collaborator's less clearly musical activities.

Discretion as a principle: each sound episode is as in its own room, so that their relatedness to each other is less emphatically sequential, is more cartographic or architectural. We go from sound to sound as though moving from space to space rather than as though moving along a timeline. With the ample space we have between classes, as it were, we could end up anywhere at all, and often do.

Trying out and learning to use the new recording equipment. Results are hopeful but not ready for public yet. It's too bad we didn't record our performance in church Sunday morning, it would be difficult to beat as a performance and the sound of the space is better than the living room is.

The second E-natural. As a single key is repeated the sound rolls in its string resonance, and that roll is attended and molded by our sense of what that roll is shaped like, to the extent that our recovery of the actuality of what it was shaped like lags a bit behind what we hear as we hear it.
Posted by Keith Eisenbrey at 12:39 PM No comments:

There is an affinity of effect between these intricate multi-stringed chamber compositions and the polyphonic vocal music from the centuries after Machaut, evident both in the play of color among (here) the varied strings and (there) the varied voices, and in the active movement of voices along a horizontal plane in space.

It is wonderful to hear such an ambitious and carefully heard work from such a young composer. It might be a bit too long, or it might simply need some more craftily applied pedal here and there to finesse the colors, but these are quibbles. I look forward to hearing more!

There is mortal danger in the siren's song. It is not just in myth - it also presents a compositional problem: once in it is heroically difficult to transgress. Just ask Tannhauser.

Another solid, challenging piece. Seattle is a veritable hotbed for creative clarinetists, and the Chapel loves that sound. I don't have much to say other than that I was digging it all the way. More!


circling closely in
near choate meta-axis
timing the same stone

This may be the first appearance of Karen's drums on a BR tape. Anna, in seclusion, converses with the future.