In a single song the horn steers a course from song to dance, from image of voice to image of body.

Arranging chunk to chunk, the patterns of notes don't create the harmonies from themselves, but just bounce around as though trapped in them.

The instrumentals are fabulous, riding just on the edge of too fast for the tempo. They would have been miles ahead in my book if the one-trick pony singer, a misanthropic spawn of Frank Zappa & Ian Anderson, had kept his mouth shut. Cutesy art-punk.

Over the decades these sessions have been many things. Among them has been a sort of aural snap-shot album of our collective life. Midway through this session Karen's mom comes over to visit, sharing some of the first pictures of our then new-born nephew. Prior to that were 10 to 15 minutes of luscious noisy roar. August of 1990, Karen, her mother Marilyn, Aaron, and I participated.

A session full of players: both my sons, Karen, Aaron, the above mentioned nephew, Anna, Neal, and me in June of 2000, celebrating the 16th Bannediversary. The opening does not bode well, a muttery electric guitar (played by me, I think) dominates a sound that could be the quintessence of incessance. As we peel players the sound thins out, guitar and drums are put away, and we find a surprisingly lovely quiet peace.
Posted by Keith Eisenbrey at 2:52 PM No comments:

This is another file that Ben sent me recently (Thank you!). I'm extracting the title from the computer file, so I am only presuming it is more or less correct.

Spoken text and percussion feeding back into the spoken text through its un-pop-filtered pop. Room reverb cut short as though damped. Page turns to the remains after spoken text.

Apparently this vocal quartet recorded exactly two cuts ever, both on the same day. For about a half a second at the beginning of each verse you could believe you are in for some very nice ordinary music. Then you are pitched headlong into a rhythmic and contrapuntal whitewater. Up for air just in time. Back you go.

I love the way the low clarinet occupies a border between vamping for time and being the main melody, and how the piano just melts a few notes into the sound.

It's the backup singers and arrangement that make this one for me, how they pile up.

What a rhythm section is about: a multitude of specificities within the beat.

Karen, Aaron, and me in July of 1990. Transparent but mis-balanced in a fine way.

In the late '90s I was starting to play with the possibilities of composing using a mod-17 pitch-class system, i.e. treating pitches that are 17 semi-tones apart as being "the same note". As part of this project I wrote several pieces of music-like music in order to find out what music-like music would sound like in the synthetic system. Two Pomes Play was originally written as a duet for clarinet and bassoon, but having midi easily available I was tempted to tinker with it. These versions are from 2005 and end up sounding like computer or video game music of an earlier era. Not bad, and not so long as to cloy - kind of fun actually.

This was the recording from my recital of June 2010, at the Chapel. I still groove on how it spreads immovably from the ordinary into oddly warped planes. Here's the score. And here's a home recording with more right notes. 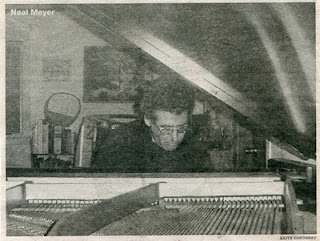 There are many musics in the world that are not quite like any other, but there are few of which it must be admitted that there isn't any other at all similar. Neal's Gradus project, in conceptual scope, dedicated application, and sonic delicacy, is without peer.

rounded endings   and then not    or protract

This lovely session persists as sound without resorting to musical contrivances. Scrape and bang, with light drumming. Nicely transparent throughout. I posted it on Sound Cloud, so it should be there in a little while. Karen, Neal, and me in May of 2000.

Karen, Steve Kennedy, Aaron, Neal, and me.
Posted by Keith Eisenbrey at 5:34 PM No comments:

This was at my church, so I suppose disclosure is appropriate, but I would heartily recommend this gentleman to your ears anytime and anywhere. He played two sets at the gospel end of bluegrass or at the bluegrass end of gospel, depending on which way you look at it. The rest of the trio consisted of Clay Lillard on banjo, and a young man who's name I regrettably did not catch playing upside-down mandolin (right-handed mandolin played left-handed) and singing the tenor harmonies. Among other joys, they presented a veritable master-class on just how easily tight an ensemble can be.

In the fifth chapter of the book of Daniel, at the height of the king's feast, a human hand appeared and began writing words on the plaster of the wall of the royal palace, next to the lampstand. I don't know what 'Quixingshan' means any more than what Belshazzar knew what the writing on the wall portended, but even through the midi with its lock-step vibrati and armless string players the sense in the sound of an indictment not to be ignored, of a divinely accusatory graffito, was enough to give me the willies.

Karen, Aaron, and me making noise back in 1990. The first 10 minutes is spectacular, but as soon as we start talking it falls apart. I was the first guilty party this time around.

November 26, 2011
Your Mother Should Know
Sky Church at EMP, Seattle

Full disclosure is required here: I'm married to the drummer in this band, and the other half is my longtime collaborator Neal Meyer. The show was great fun, Karen's VistaLites looked great, and the light show on the big screen behind them was stupendous. There is still some work to do balancing all the parts, but I've heard similar problems in some pretty big-name venues, with some big-name acts.

From May of 2000, the classic five-piece personnel: Karen, Anna, Aaron, Neal, and me. Reeds and percussion move toward plucks plunks and percussion ending with evening lounge.

Karen, Neal and I were joined by an old friend of N&K, Brent Bankson. It ended up being something of culture clash, mutually mystifying. Listening back though one can hear the ebb & flow of various attempts to find anything like a common ground.

In May of 2010, Karen, Neal and I are joined by Neal's young progeny Isabel. Mostly drums, electronics, plucks and twangs.


December 1, 2011
Ain't No Flies On Auntie - Perry's Hot Dogs [from Allen Lowe's That Devilin' Tune]
Down On Me - Eddie Head And His Family [from Dust to Digital's Goodbye, Babylon]
Lafayette - Hot Lips Page [from Allen Lowe's That Devilin' Tune]
A Bit Of Blue - Art Pepper [from Smack Up]
Gloria - Them [collected from Dave Marsh's The Heart of Rock & Soul]

It's a few years later, but the sound and vibe remind me of the Northwest garage bands of the early 60's: It could almost be the flip side of The Kingsmen doing Louie, Louie.

Post-Bowie glam from 1980, shading more arty than ultra-professional. Constructed with clean transparent tracks, each in its own echo chamber, the whole then lightly smeared with a slow flange. The Psycho Furs were, if not the favorite pop band of my friends at Bard, then at least among the most-often mentioned. This may have been the first time I've listened to them carefully.

Just three of us - Karen, Aaron, and me. Flashback to the early 90's.
Posted by Keith Eisenbrey at 4:25 PM No comments: