"The blues ain't nothin' but a good man feelin' bad". Train sounds roll through now and then, presumably created with stage sound effects. Due, however, to the recording fidelity available in 1916, there is not enough granularity to easily distinguish a sound-effect from the real thing. It may as well be a real train rolling through. Not the original title, of course. Even so a truly magnificent track.

The swing here has less to do with time point rhythm than with weight. The eighth notes are played pretty much evenly in time, but are weighted as though they were in triplets. Hips move on the beat, gliding off at a slant.

Phrases end with an extreme slowing, each picking back up of tempo finding some aspect of the picked back up tempo that sounds like a continuation of a subdivision of the slowed down tempo. Schubertian phrase fractals.

After all these years I may finally be coming around to Italian opera that isn't by Mozart. In particular I have had problems with what seemed to me a mismatch between the affect (light and silly) and the dramatic moment (dire). But here the clarity of the accompaniment, be it ever so boom chick, can be heard as a constant surface of quiddity, beneath, above, and around which are spun melodies of extreme sophistication, and even within which unexpected transformations unfold. These are the grounds of the Berliozian affectual non sequitur. The ensembles are stunningly supple, and there was a moment in the big chorus just before Mary Stuart's last entrance where the choral writing opens into unexpected dimensions, as though we suddenly are aware of the abyss beneath us. Murderous power struggles should not be so timely, alas.

Jeremy plays with such tender poetry and intricate clarity it seems bad form to quibble, but I do wish he would refrain from all the head wagging and foot kicking. I made the mistake of opening my eyes at the end of the Stravinsky, just in time to catch a flat falling winsome gesture. Please! But aside from my problems with ill-fitting showmanship this was a tremendous evening of fascinating music. His retrospective of crazy rhythms was spot on, though I'm sorry he didn't play Art Tatum's Tea for Two, which was in the program but not performed. The Goldberg Variations were ravishing.

When I ripped these from vinyl I made no attempt to number the tracks, so this mini-recital was reassembled in alphabetical order. Each song has a complete and ornate frame. When the song is done it stays done.

The symphonic accompaniment plays the part of a cloud of familiars besetting the singer, echoing, mocking. An ever-renewing, inescapable farewell.

In the first rung, among the As and Es up high all the c-sharps were gathered toward the bottom the keyboard, so that the whole came across as a big first-inversion triad.

In the second rung, two or many threads weave in gentle diagonals, ripples on a frictionless pond - or a diaphanous friction is intimated in the refraction of sound upon sound.
Posted by Keith Eisenbrey at 3:55 PM No comments: 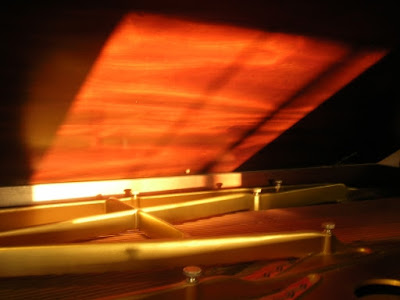 Ms. Uchida plays this so beautifully one could almost be convinced the piece was written for modern grand piano. Her touch is light, as though measured to the milligram. What gives the game away is the sheen, the lack of local presence in the tone. There is no hint of a fortepiano's clavicinian twang to draw us close.

There are so many ideas to play out that they are continually turning sharply to the side. Finding oneself back at a prior idea is like suddenly coming upon a room one had left some time ago by another door. How did I get back here?

Eyes fixed dead ahead, inexorable in a focused, lyrical way.

A set of modest-sized orchestra pieces, thematically linked, masquerading as a symphony. This is one of those pieces that really shouldn't work as well as it so fabulously does. JEG and crew give a spirited performance.

March 10, 2016
Something of Mine - Vocal, Tambourine, and Acoustic Guitar Tracks - Your Mother Should Know (as St. Rage), Karen Eisenbrey and Neal Kosály-Meyer

Unfortunately there were technical difficulties with the guitar tracks, so we'll need to do those over.

As I was starting to break down the recording equipment Neal informs us that he has a new song. I hastily put everything back and end up with a splendid acoustic demo, celebrating the very nearly random city of Jerseyville, Illinois.

An Exchange - Part the Last

Several months ago Neal and I exchanged emails about Cage. The previous installment can be found in my post of November 7, 2015. Here I choose to bring it to a close. The part of the Bard is played by me, Neal is the Wizard.

Bardic non-sequitur
What if . . .
The variety we perceive is real?
And more, that such coherence as we find is entirely of our own construction?
God creates, consciousness invents what God has always been creating.


The bard awaits the wizard’s response.
Wizard, after long distraction, after having re-read that whole thread, attempts response.
What if . . .
The variety we perceive is real?    If the variety we perceive is real, then our organs of perception must be instruments suited to their tasks.   Must admit, not certain about the origins of this what if, as I don't recall ever stating that variety is an illusion, nor do I think Cage ever said or implied anything like that.    Returning to the "child who says I love you" exchange above, what is real is that as subjects we alternate between separateness and union with our world and also with its separable components.   To thicken the plot, we probably tend to get stuck in one or the other swing of that pendulum.   The General Neurosis might be described as human beings getting stuck in separateness.   Perhaps the mystic ideal of eschewing separateness and achieving some permanent unitive state is equally neurotic.   Feels to me that letting the pendulum swing, and remembering the other end of the swing even when we're at the opposite pole--that would be optimal.
And more, that such coherence as we find is entirely of our own construction?    Presumably "our" means "human beings' "?    That presumes a fundamental separation between us and everything else that I don't accept, or rather, again, that constitutes the General Neurosis, that thing out of which I would like to find a way.   To accept this "what if " would seem to entail seeing that separation as normal (i.e. NOT pathological, i.e., NOT the General Neurosis).   So it's a very hard "what if" for me to accept, and very hard for me to see a way that I could accept it without enormous sadness and resignation.   It feels less like accepting the situation as normal, and more like accepting that there is no way out of a terrible cage.
God creates, consciousness invents what God has always been creating.     Curious as to how you would define the distinction between creation and invention here.   Feels to me like your formulation would imply that God and consciousness are one and the same.   I am trying of late to figure out what a non-hierarchical theology would be--an anarchical theology.   The notion of consciousness as something that is not the exclusive privilege of humans feels like a crucial part of that figuring.   So--accepting that our consciousness feels mostly like a different thing than that experienced by the non-human beings, what if that feeling is simply a pole of the pendulum's swing, and that on the other pole that differentness dissolves, though re-differentiating once more on the next swing.    Is consciousness the same thing as creating--primal creating--as listening is primal composition?    The doors of perception seem hereby to be transmuted into the doors of invention:   is this the cleansing Blake foretold, allowing us to see all things as they are, infinite?
The bard awaits the wizard’s response.
wizard out.
Posted by Keith Eisenbrey at 2:37 PM No comments:

Part of what an instrument is is the relation between the size of its box and the intricacy of its articulatory potential.

Within the hesitations (between phrases, between lines, between instruments) a lively voice plays hide and seek.

Delightful play on how many of anything we might count that there are, drifting at last into the realm of the unnumbered.

Altogether another fabulous night at Seattle Composers' Salon, every piece a delight.

Lena takes great care with the progress of her vowels, active to the end.

Almost in stripper tempo, the lyrics are an excuse for a couple of vocal show-offs.

All the sound is stuck tight to a chunky driving beat, like rust on an old spike.

He leans his voice out over the top of the beat, the shoulders of it are out in front, pushed from below.

There is hardly a bit of sound in this mix that wouldn't be perfectly clear on a cheap transistor radio.

96 Tears - ? and the Mysterians [collected from Dave Marsh's The Heart of Rock & Soul]

? rides his voice from high in the back of the mouth, rolling up over the top.

Choirs of instruments gnawing at the core, avoiding the Loom Monster and the Stompers - all the hazards of a gnawer's life. Something huge spins beneath the surface. Now briefly we are outside, where the spinning can't be felt (but still the Monster looms). The gnawing is getting somewhere.

At the end there are episodes of silence in the score and applause (and boobirds?) erupt into it, followed by shushushushing. As these episodes recur the shushing and the applause and boobirds play a social (or anti) coercion game with each other. I love how suddenly the music is in a room with people, people with attitudes.

Stu is the larynx, the abbey is the giant's mouth, a sounding organ.

Prog Rock, the music that arose when the musicians started hanging with the guys in the booth.

A wire sculpture, huge as an ocean liner, in which we the life-raft wander, weightless, narrowly lit.

A score is a lens of/for people's proclivities, a wedge prying open a space for use.

In the 90's we had small children, and Sonic Brilliance was their improv session before the adults did their thing.

There is more than an undercurrent of violence in this sound. Breathless staccato jabbing.

Stormy - The Invisible Eyes [from The Funhouse Comp Thing]

The surface has been scraped, roughened, smeared - just so.

Restless birds roost and rise across the marsh. The camera pans slowly.

Her pieces: Three Times Seventeen Equals Fifty One and Recipe for Disaster. Complete with the introduction and questions. Even more fun the second time around.

We are not the speaker who does not rest, we are the attempt to flee.

The artificiality of the operatic model (recitatives and arias, etc.) is a firm bind, subtle pushes against its constraints tell more than they would in a less conventional style. Some truly fancy singing.

Insurrection slipping unseen between the gaps.

Fourth in this series, exploring the songs I learned in church as a kid.