In late 2010 Steve Scribner organized a concert at a little theater in the town of Snohomish. As a part of the project he asked me to prepare two seven-minute pre-recorded sound files. Steve mixed these with two of his own. Two Cuts for Snohomish are my contribution, and Snoho Pieces 1 and 2 are the first two (out of four total) of Steve's mixes. At the concert we improvised while these were played into the space. That was kind of fun, and I'm curious to hear what the result sounds like after not listening to them for a while, but the combinations themselves are really quite nice.

Saturday May 4, 2013 at 8:00 PM
Keith Eisenbrey and Neal Meyer at The Chapel Performance Space, Good Shepherd Center, Seattle
Music for solo piano:
Eisenbrey: Welcome to my planet. I come in peace.
Meyer: Cage - Solo for Piano
Posted by Keith Eisenbrey at 12:15 PM No comments: The mere separation in space between the two choirs is nothing in comparison with the play of depths among the voices.

An immensity. As though the entire scale of interactions from molecular to cosmic were imminent to mind.

Ben Boretz once asked "Can a symphony for big orchestra be from the heart?" The same question could be asked of choral music for cathedral spaces. This piece, without question, is, but that the answer is more often "yes" than it is for orchestra may be linked partly to the social theater involved. A chorus, in general, looks directly at us and sings to us. An orchestra, in general, sits in mixed attitude to us, their sound mediated by the technological marvels which are their instruments.

Late, twisted chromatics hearken back to Brahms or Bruckner motets, but also to some of the same sly energy as in Strauss's Metamorphosen.

One of several sessions over the years centered on my 1981/1982 score Book of Windows. In this case I was reading that portion of the text that was riffing on a line from Stockhausen's Hymnen: "Wir können noch ein Dimension tiefer gehen." with each page getting a new treatment.

The sound of the late evening wearies.

March 21, 2013
Your Mother Should Know
Love Blackmail, Boundary
Posted by Keith Eisenbrey at 2:33 PM No comments:

Puccini is hit or miss for me. La Bohème is one of the winners. As in Madama Butterfly, the story is human sized and the characters are as believable as those of late Mozart. But even more, I love the mix and trajectory of the different voices, from comic male quartet to intimate duet to raucus café and back again to the voices of Act 1 transmuted in sorrow. Act 3 (called Act 2 in the Seattle performance) is about as nice a dramatic composition as one could ask for. 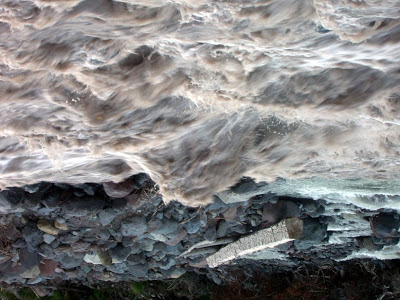 A dog-whistle-high piercing pianissimo-to-mezzo forte feedback whine persists obstinately, flirting with discomfort. A percussion layer continues imperturbably, shifting color matter of factly, but otherwise immovably doing. A third layer interrupts or intercedes with radio scratch or guitar. Oddly it is the intercession that comes across as the context, the eventscape, within which the more continuous beings abide.

Five years later, starting in combo mode of piano, drum, and cornet, I hear much the same character mix as in #690. It even ends with a high long-held harmonica, still and quiet, serendipitously reminiscent of the start of the earlier session just heard.

The entire album could be heard as a set of loving recompositions of Savoy Truffle and Bohemian Rhapsody. The quicksilver arrangements hint at a Tatumesque sense that numerous songs lurk just below the surface and pop in whenever a crack opens up.

On the surface this performance comes across flat-footed and inelegant. But the square approach to rhythm throws the intricate particularities of the orchestration design into high relief.

The science of chord voicing, both vertical and horizontal, aided and abetted by the in-your-face presence engineered into the recording. The grain of the HiFi sound approaches the surreal quality of the too-deep-too-bright focus of Bambi. I am torn between not wanting to hear page turns that perfectly imaged, and digging it.

A short poem that lives for its final lines. "And 4 police cars parked outside the painted / gate, red lights revolving in the leaves." 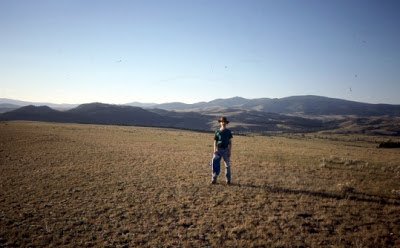 Posted by Keith Eisenbrey at 4:15 PM No comments:

It is lovely to find so much that is unexpected within the realm of an established social music. Who would have thought that the first sounds out of chamber folk band Canals of Venice would suddenly bring the shade of Machaut into the room? Who would think that the tiny Emma Danner of Red Ribbon could sink such a righteous weight down through the stage? Dead Bars, in midair pogobounce pivotted punk around to its roots. Time-travelers-from-the-past Your Mother Should Know had their strongest outing yet, tightening up the arrangements of their standards, and mixing up the set with wildly varied song-settings that touched notes of Cole Porter and Duke Ellington as well as the venerable Boss. They finished with a fine rendition of Louie Louie in honor of the Sonics.
Upcoming

Saturday May 4, 2013 at 8:00 PM
Keith Eisenbrey and Neal Meyer at The Chapel Performance Space, Good Shepherd Center, Seattle
Music for solo piano:
Eisenbrey: Welcome to my planet. I come in peace.
Meyer: Cage - Solo for Piano
Posted by Keith Eisenbrey at 4:05 PM No comments:

Email ThisBlogThis!Share to TwitterShare to FacebookShare to Pinterest
Labels: Canals of Venice, Dead Bars, Red Ribbon, Your Mother Should Know

This concert was a joy from beginning to end, with far too many wonders to mention. But somewhere between the timbral circles Paul Taub was drawing within single repeated pitches in Music for Magpies, and the play among the contours of the tunes Catherine Lee was spinning against the spacial vectors of electronic sound in Social sounds from whales at night, brought to mind the giddy mass flocking of birds and fish as they wheel in near unanimity, an image that worked quite well as a key to negotiating the delicate, carefully calibrated rhetorical flow of these musics.

As a note for my benefit, and not as a complaint: a case could be made that each of these pieces, even the toy piano piece, concerns itself less with the piano as such than with varieties of latter-day Lisztian virtuoso pianism, and with what can be extracted from that prodigious energy. It is interesting that more than a century after the passing of the Abbé, it seems to be difficult to approach the keyboard without a nod in his direction. Cristina, of course, just eats this stuff up. My local music bias was pleased that the concert began and ended with the music by local luminaries, and that they held their own quite easily. I was also pleased that within three days time I heard Cristina begin a concert playing piano 4-hands, and end another with a piano duo. Who arranged that?

A huge hand to both Emily and Cristina for the immense amount of work it took to so ably produce these spectacular and thought provoking events.

Four takes on the idea of accompaniment, taken in reverse: music and film as mutual accompaniments to each other; likewise with music and dance; percussion providing a wire-frame for a piano trio; and the incorporation of two parts into one.

The aural record of my reverie on Sibelius #1, Kajanus, hi-fi, compact disks (new at the time), and phonographs, the greater part of which ended up published in News of Music. What I don't remember is whether I was writing this text as I was speaking it, or more likely was simply reading it.

Not surprising that someone cued up Sibelius #1, but I was intent upon airing deeper anxieties as an experiment in text-generation (accompanied by detractors and an enabler). One of many tapes in which things were tried but in which results were thin.

The tamtam roil arises from the impression that whichever way the pitch committee is headed the populace is going the opposite, which sense lingers even past where the tamtam has ceased to sound, and even past where uppitchness and downpitchness have wandered into other qualia sets.

Posted by Keith Eisenbrey at 5:19 PM No comments: