The Sentient Insect Variations: Zoar Valley - Pete Comley and Dave Fuglewicz
Our progress is a descent, spelunking through a viscous gelatin, thick with signal, gas-giant deep, to the mighty thrum of the world swarm.
My notes from a previous listening on October 26, 2002: Wild and beautiful. Like some crazy urban jungle heard through several timewarps through several scales of magnitude at once. The sci-fi film score to kill them all. Dangerously intense - gird your loins! At last we descend into the crater: wasp-lava.
Ambarabusaraba - Quintetto alla Busara
Music for social dancing, as opposed to couples dancing. Competitive in the sense that lifts the whole rather than in the sense that comes out on top.

July 22, 2014
The New Mother: 2 Excerpts - John Rahn [from Open Space 21]
Piles of eels or worms coalescing into the sensibility of voice - wheels of bird flights.
Call It What You Will - Matthew Barber [from Milton Babbitt: a Composers' Memorial]
A set of artifacts for violin, piano, and electronics, remarkable for the disparate senses in which the spaces enclose the sounds. The distinctions between togetherness and alienation are completely unfinessed, or baldly composed to sound as little like parts of the same piece as possible. Fascinating.
Poiche l'avida sete (Prima parte) - Gesualdo - Consort of Musicke, Anthony Rooley
Layers of stagnant suspensions pull back to reveal us: mechanical.

July 23, 2014
Konzert in F, BWV 1047 - J.S. Bach - Philharmonia Orchestra, Otto Klemperer
Ben Boretz once opined that Klemperer's recordings of the Brandenburg Concertos made them sound like something Stravinsky might have cooked up. This one is surely the prime example. You could almost count the legato phrasings on one hand.

July 24, 2014
Sonata in B, Wq. 48 #2 - C.P.E. Bach - Bob van Asperen
Slightly irregular. Sudden dark turns.
Quartet in D, Hob. III:3 - Haydn - Tatrai Quartet
There are some fabulous legato hocket passages here that could have been in the back of Tchaikovsky's mind for the last movement of the Pathetique.
Symphony in G, K75b(110) - Mozart - Academy of Ancient Music, Chriostopher Hogwood, Jaap Schroder
Grabs a sonority and hangs on tight.
Sonata in C-sharp minor op. 27 #2, - Beethoven - Wilhelm Kempff
Kempff believes in the power of clarity as a core value. If the performance lacks something in visceral thrill it nevertheless brings forward a solid image of tonal function, immovable but transformable.

July 25, 2014
Symphony in C minor (#4) - Schubert - Berlin Philharmonic Orchestra, Karl Böhm
Long lines, multi-stage slow builds, major landmarks - this music imagines around itself an extensive world, rather than the infinitely reflexive social chamber of the court or church.
Symphony in E minor (String Symphony #3) - Mendelssohn - English Bach Festival Orchestra, William Boughton
Interesting as clockwork, but as a thing it is more like an old-fashioned concerto grosso than like a Beethoven (or even a Haydn) string quartet.
Valse in E-flat Op. 18 - Chopin - Alfred Cortot
At once a one-man-band imitation of a waltz orchestra and the evocation of being in a waltzworld: fluttery hearts and flights of romance and passion. Not a waltz, but what a waltz is.
Remeniscences de Don Juan  - Liszt - Charles Rosen
Always a good idea to start with the hell-fire since it makes a great show. What fun! Brimstone ale, cool! Party on!
Overture, Scherzo and Finale, Op. 52  - Schumann - Berlin Philharmonic Orchestra, Herbert von Karajan
Light and dark but mostly light, though it starts in a dark corner of a dark world where what counts as a door to brightness comes across as a passing shadow in the light of day.
In Session at the Tintinabulary
July 21, 2014
Gradus 247 - Neal Kosály-Meyer
[weight - duration] [order] (in that order). Simultaneity of order operates as a reset and an articulation point. Weight and Duration operate on local relations - The distance of their orderings matters to how much they matter.
Upcoming 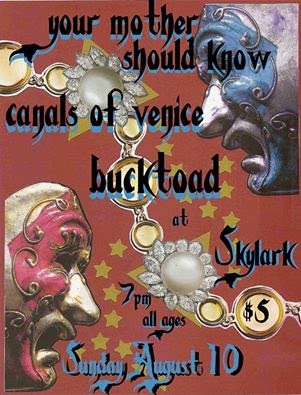 Posted by Keith Eisenbrey at 12:53 PM No comments:

Recorded
July 14, 2014
Seasons of the Mind (1 and 4) - Paul Des Marais - UCLA Madrigal Singers [from Open Space 28]
Mountains of acquired skills and rehearsal time behind them and what they give us is this? I listened twice just to be sure, but I came away both times feeling cleverly abused.
July 15, 2014
Folk Songs - Eric Mandat - Eric Mandat
A basic impulse of Eric's use of extended techniques in these pieces is to provide an accompaniment to the main thread. The sounds and rhythmic-dynamic textures created tend to form two distinct hierarchic roles. It is this as much as anything that gives them such a solid folky core. I love the way all the parts of the flamenco dance coalesce at the end into a very angry hornet.
July 17, 2014
Tin Machine II - Tin Machine
As Tin Machine Bowie attempts, essentially, to reinvent himself as himself. Hints of '70s Lennon and '60s Barrett linger on the tongue.
In Session at the Tintinabulary
July 14, 2014
Banned Rehearsal 865 140714 - Pete Comley, Karen Eisenbrey, Keith Eisenbrey, Steve Kennedy, Aaron Keyt, Neal Kosály-Meyer
Another lovely evening on the porch. Rattles, ocarinas, and electro-pingers accompany Neal plucking a guitar.
July 20, 2014
Yakima River 140720 - Keith Eisenbrey (recorded outside of Zillah, WA)
And here is the reason this blog is two days late: we were out of town. Sunday morning I got up just after 6 and walked from our hotel to the edge of a slough on the side of the Yakima River and recorded 40 minutes of birds. I saw a hummingbird, a heron, and innumerable swallows. A little sandpiper thought I was there just to record her. She kept coming back to teeeeeept for her fans. A hawk flew over high up with a snake dangling from its talons. A jay of some ilk or other complained about something in the last few minutes.
Upcoming

Sunday, August 10, 2014
Skylark (Seattle)
Your Mother Should Know
Canals of Venice
Bucktoad
Posted by Keith Eisenbrey at 4:35 PM No comments:

turn the wheel and up comes the next. trumpet piano clarinet. cookin' party

how it cycles back to the start, angelic smooth envelopment

In the song I'm Straight Jonathan Richman manages a three level conceit:a transcription of a telephone message, a message he wished he had left if he'd had the courage, and (most interestingly) a rehearsal in thought of what to say with all the back-tracking self-conviction of a will working out a decision. Other standouts on the album are Hospital and Government Center. All in all a strong showing, but there is often a tension between a song and its arrangement, as though it was uncomfortable in its clothes.

In Session in the Tintinabulary

A new note :: tempo slower than breathing thinner than spill of thought's words

a geography of parsed layers :: trace of tectonic action.

Posted by Keith Eisenbrey at 4:05 PM No comments:

June 29, 2014
Tone Roads 1 - Ives - New York Philharmonic, Leonard Bernstein
mock fugue gnarly tree
tangle of woody stems stops
that's how far it grew
Violin Concerto - Frederick Delius - Royal Philharmonic Orchestra, Vernon Handley, Ralph Holmes
colours: non lethal :: warm weightless :: cushioned
diaphano-sonorous
blows softened, sans joint-jolts.
Concerto in C (#3) - Prokofiev - Nürnberger Symphoniker, Ainslee Cox, Jorge Bolet
Front-loads his big tune, though he does soft-pedal it how the clarinet splits itself in two a few measures in, and never does gush it the way Rachmaninoff can't resist. Bubbles up youthful bursting forth out of doors FAST or brought up short by some hard surfaced lyrical upwelling.
Royal Garden Blues - Mamie Smith's Jazz Hounds [from Allen Lowe's That Devilin' Tune]Boneyard Shuffle - The Red Heads [from Allen Lowe's Really the Blues]
July 2, 2014
Piano Concerto #2 - Bartok - Orchestre de Paris, Lorin Maazel, Sviatislav Richter
Musical material is musical material. Look at the brick and it says "brick". Unable to let on that there might be more going on than he planned. All those arch-forms and putative Fibonacci game plans - why do I get the nagging feeling that these are all there not entirely for heart-felt musical reasons but also partly because they can be explained in program notes, because they are the sorts of things journalists can understand, but which are, as to the musical experience, a smokescreen or a brick wall?
July 3, 2014
Symphony #1, op. 17 #2 (Exile) - Alan Hovhaness - Seattle Symphony Orchestra, Gerard Schwarz
A fascinating, if not entirely successful, take on a folk-idiom symphony. It seems to progress, or at any rate shift along, like a series of block-prints, related more by their stylistic voice than by any particular thematic or dramatic undercurrent. The ending took my breath away: two clarinets on a perfect fourth: a softly fading linger.
In Session at the Tintinabulary
June 30, 2014
Banned Rehearsal 864 - Karen Eisenbrey, Keith Eisenbrey, Steve Kennedy, Aaron Keyt, Neal Kosály-Meyer
Our session was out on the porch since it was so nice out. Steve brought along his recording of our concert (mine failed due to user-error). During the first of those two sessions Neal opened all the chapel windows wide, causing a certain amount of wind noise on the recording. Unexpectedly, the effect of this was to take me back to our early days when we would often break the fourth wall, so to speak, picking up the recording microphones, put them in cans, rub paper on them, pretend they were dinosaurs, and in general abuse them no end.
July 4, 2014
Ain't No Easy - Keith Eisenbrey
track 1 - wood drum
track 2 - vocal
track 3 - hollow-body electric guitar
track 4 - buzz banger stick
track 5 - electric toy reed organ
Posted by Keith Eisenbrey at 1:56 PM No comments: