The spirit of wandering in delight can only come to terms with, can only be brought back to remembrance of, the Stern Truth, by wandering with delight and wonder through it.

metacomment: in contradistinction to violin concerto-ness, where the solo line plays the part of a singer, of language bearer, and the orchestra however integrated is the pit band; piano concerto-ness is a meeting of equivalent universes - the piano clarifies, interprets, analyzes, the orchestra. It teaches us how to hear it.

1. announces its solo sound so that the orchestra is already an interpretation, an inverted concerto. The orchestra is taught to be a piano.
2. The balance between/among: dynamic level and duration of passage || size and number || focus || implied and explicit. Love how, at the join, string sound and piano sound conjoin: pizzicato as a structural gambit.
3. The piano is taught to be an orchestra (and hearkening back to 2. with the modulation on the quiet pizzicato.)

Fiercely unsentimental. Completely poetic, but so with a bone hard poetry of philosophical assertion. No swooning tulips here. Let's get serious folks, this music is talk.

Ages ago, at the time he was recording the complete Polonaises, Peter Katin was a regular on the Compu-Serve classical music forum. I had been looking forward to purchasing the CDs when they were released, but just at that time we had hour-reductions at work and money got tight. Peter sent them to me gratis. I am sorry to learn that he passed away last year at the age of 84.

Posted by Keith Eisenbrey at 2:54 PM No comments:

"The second aspect of the garden is a series of mental states and of corresponding corporal gestures, inscribed in memory. The fixation in memory of the sum of all the experiences that have already occurred, treating matter through body actions, allows one to recall them at any time in any order possible. We have here the notion of a walk through our physical and mental potentialities. As in everyday speech, the process of remembering is not a fully conscious act, as can be the case with written composition and the time of relection that it permits, it remains based on automatic reflex actions. It is a traveling between consciousness and unconsciousness which opens a path to an awakening ecstasy." Jean-Charles François "Dialogs of Deafening Gifted Eavesdroppers"The Open Space Magazine Issue 11 Fall 2009

buoyed (ant)
on the body of which
this
sur
face

Ringing the dynamic between independence and cooperation. It takes a village to be a fugue. And how it hangs in midair at the end, cadenced but unsettled.

In 2013-2014 I composed a set of 8 piano pieces under the project title Études d'exécution imminent. They are 17-tone serial works, all based on successive m-transforms of the same "mod 17" tone row. The original chart projected 16 or 17 pieces in the set, but after the first 8 I felt I had come to a stopping place so I took a self-imposed, and not particularly strictly observed, sabbatical from writing music. In the spring of 2015 I started working on Second Thoughts, which takes up the place of the ninth etude. That was a bit of a struggle, and took about a year and a half to complete. The four pieces that constitute this tenth etude: (Up's Up), (Down's Down), (Down's Up), and (Up's Down), were essentially complete in a week. Such are the vagaries of creative work. The recording I made on Sunday is not intended, on its own, for a reading of the piece, but as raw sonic material for an electronic arrangement I am concocting.


As frustrating as Banned Rehearsal can be at times, over the decades, there are moments of awesome transparency, such as this. Improvisation is really too fancy a word for what is really just dinking around making sounds. Full engagement is what makes the difference.

Karen and I were staying in Spokane after dropping our oldest son off at Eastern Washington University. We had very fine dinner at Stack's at the Steam Plant, after which we were invited to explore. It felt like we had the place to ourselves, and it is truly the most visually interesting restaurant space I can remember. After a while we found ourselves in a circular room at the bottom of one of the chimneys, presumably open to the night sky a hundred or so feet above our heads. We closed the door and stomped a stomp.
Posted by Keith Eisenbrey at 3:46 PM No comments:

"But every action is determinate, when it happens. and every experience is determinate, as it happens. And yet the connection between action and experience is as ambiguous as the connection between intention and perception. It seems that experiential transactions are plagued with ambiguity and indefinitiveness at every level, seem to have ambiguity and indefinitiveness written into the very core of their being. Which is to say, they are precisely what marks the aesthetic, what gives the aesthetic its edge of epiphanic content, what keeps an aesthetic phenomenonon in play within our psychic universe. Not problems, that is, but distinguishing features; not be be overcome with devices enabling claims of greater objective authority but to be cultivated as treasured properties of the imaginative life of music." Benjamin Boretz  "inside in, outside out", The Open Space Magazine Issue 10 Fall 2008

September 5, 2016
The Act Of Seeing With One's Own Eyes - Stan Brakhage [from by brakhage: an anthology] 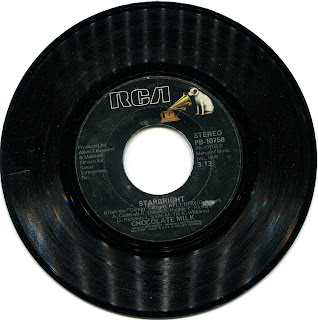 This was a rescued record, but only barely rescued - what remains of the signal hints, suggests, an elaborate soul arrangement made with modest means.

Finding a way to stand in a strong wind: the rhythms with which the various parts resist the implacable lift forward, the free flowing propulsion.

From a corporate Christmas album. The accent of the vocal group (some boy choir or other) is oddly, uncomfortably, off - as though they had been taught the English vowels by someone who had read about them in a book.

Full of declaimed text: In Those Days the Ostinati Shall Lie . . . Music can exist because our ear brain is a superpower, but there is a feature of that ear brain that from the point of view of music is an unintended unfortunate result. The superpower ear brain tracks for language events, locks on, turns them up, and turns everything else down. The consequence is that if language events are present, especially language events that seem to be speaking to us directly, such as declamation, those language events suck all attention to themselves. Song, in all its myriad forms, are a workaround. Without those hard won regimentations, all those straightjackets that song puts on language events, any other audible expression in the room may as well pack up and go home.

The symphonic arrangement, as fun as it may have been to put together, varnishes away the power of the song.

Like a long vehement raspberry of robust reedy harmony.

In the deep inaudible the distant engines of the sky retreat and advance, dopplerly, in a cloud of indeterminable directionalities. We are past the surface tissues here, we are in deep cave's cathedrals. The inaudible texture of silence feeds music's incandescence. Stillness of an evening sky. A language within a cryptology. Shape of sound intruding on our attention. Lyric green pools. Vegetation. Lush.
Posted by Keith Eisenbrey at 4:59 PM No comments:

Wandering within a container. Dreamy.

Jessi Harvey
Pieces of the Puzzle

A struggling and a wrestling.

Sheila Bristow
Two Songs: Leap Into Love and The Finding


Each of the opening arpeggios is like a finger brushing the reverberation of its three preceding chord-strokes - as though their reverberations were harps - as though the piece were creating within its space, from within the substance of its notes, instruments and players.

In which meter is re-conceptualized as entirely plastic, like heat-pliant steel, but weightless.

The circus is a metaphor of the universe, or an excuse to trot out the musical fauna for display and study - of how and of what it is made. The grim oppositions of every kind of material: Outside/Inside :: Puppet/Master :: Circus/Theater :: Audience/Dancers. The gloriously polyphonous thrum. He even gets his big tune in there as a distraction to be suddenly interrupted by the interior drums let loose. I love the desultory tambourine bang just after the fatal thrust. Et tu, Igor?

The best way to get a good recorded sound in the early days was to compose around the limitations of the tech. Still is.

The quintessential free-range kid. I love how the introduction of the characters one by one (masquerading as an introduction of the orchestra) is echoed at the end by the parade of all at once, and how incrementally the story emerges in tandem with the incrementally complex orchestration. SP isn't just telling a story, and isn't just demonstrating an orchestra, he is also explaining his musical thinking. Bowie nails it.

Two heads collide: a sly one and a cockeyed crazy one.

I got to thinking: As we listen through the imperfections of the recording tech do we filter out the noise or do we fill in the sound's envelope with the music we invent as having been heard?

Got your big fat tube-amp guitar sound down solid.

The lyrics are a red herring. The action is in the rhyme between voice and guitar, leaning forward off the beat.

Charisma trying on outfit after outfit. Constant motion without arrival. Fascination without obligation.


Although it is clearly just that, shucking corn, it also sounds, at times, like muppets making out in the back seat of dad's Nash.