I will be performing the first book of Emily Doolittle's Minute Etudes.

Hot day out on the porch in jug band mode.
Isaac, not quite 4, was being a bit of a pill, but there was more lethargy than focus anyway.

Put sounds in a room and shake.

I spent the summer of 2010 tearing down a fence in our yard. This was 40 minutes or so of squeaking nails, pounding sledges, ringing metal, cracking wood, and clattering boards - against a backdrop of traffic, songbirds, crows, and general Saturday summer afternoon hubbub.

I was turning pages for Cristina, so my attention was on matters other than simple enjoyment. The choice of these pieces, of these composers, and of this ethnic segment of the repertoire, without shoving it in our faces, make it clear that the chosen ethnic segment is anything but a monolith, that the featured composers are vibrantly musical, and that the pieces are glimpses of a vast and manifold wealth of deeply engaged musical thinking over on the other side of our shamefully militarized border. I very much appreciate Cristina's able championship of this music. It is my understanding that she has recorded most, if not all, of these pieces. I eagerly await the finished recordings!

Until a week ago this concert was to have been shared with Tiffany Lin, who unfortunately had to bow out due to a hand injury. Rather than cancel, Adrienne stepped up to the plate and put on a full show with very little warning. Well done!

I was glad to hear how well our local composers shone amidst their more widely known colleagues. Janice's set of four short pieces were fragmentary patternings of sonorous figures, richly textured fabric scraps, musics not of propulsion or drama, but of inhabitance and empathy. Jarrad's Ellie was puckish and fey, looking at us from an upside-angle, while his Prelude (my favorite piece of the evening) was like an artist's palette in which some inscrutably chosen array of color-layers has been slipped askew.

I was not a big fan of Philip Glass before, and I'm still not.

In A Landscape is proof again of Cage's early fascination with keyboard figuration, as though some scrap of Satie had been left to bleach in the sun for 50 years. Can there really be anything left when there was nothing there to begin with? Cowell is big and splashy, always fun to hear, and Bunita Marcus's Sugar Cubes is (are?) tiny and careful - an interesting choice to finish with.

Adrienne is an excellent pianist, but a young performer, and it feels like she's still searching for a comfortable sense of herself as a physical presence on stage. Her fall-back persona last night was, for want of a better description, 'student recitalist'. For my money that has got to go. It has a tendency to put the audience into 'student recital' mode, with all its attendant judgmental ickiness. It isn't necessary either, since she plays quite well, and with obvious affection and sympathy for her chosen repertoire (big thumbs up for local music!) I am sure that with experience will come confidence, allowing us to see more fang now and then. I hope she visits Seattle often!

My oldest son attended Eckstein Middle School in Seattle. By far the best part of the experience was the superb music program run by Moc Escobido. Many of these kids went on to the award-winning jazz programs at Roosevelt and Garfield. This is the sampler disk from the 2004-2005 school year.

The 26th Bannediversary. An assembly of parts, a bell rung, fed back into realms of pressure quanta punctuated: an accumulation of pointednesses.

An improv session at which only two are in attendance was early on dubbed a sectional, rather than a full rehearsal. We had at the very least an agreed upon starting point, vocalizing on a single pitch (something like a C-sharp), easing into multi-phonic space. Looking back we must have planned this out pretty carefully, because 20 minutes in we start plucking on ukelele and mono-chord, and everything is tuned to the same C-sharp. I can't remember what the mechanics were, but we also had a subtle feedback system in place, bringing forward the standing waves.

Various slices of a recording session in May of 2005.

The paths through these points are not straight.

What makes this, at first, sound so composed? A limited instrumental palette, an absence of outside interference, note-y gestures. We build a drone intensity, inviting or demanding ecstatic release, provided vocally by Neal, the post-ecstatic clarity. Followed by distraction. We become a rattle, interplucked with guitar, comments by violin.

We make a loud sound that wakes the baby, who would be my eldest, now 21, then in utero.

Is there a necessary disjuncture between how hearing how this sound sounds and how this going goes?

Our first set of recorded takes, from May 10, 2005. A dense piece of neo-modern counterpoint.

Sacred choral music shares with organ repertoire a long and fecund dialogue with sacred-space architecture, in a similar way to which rock and roll has a dialogue with guitar and amplifier design. A cathedral is really the only space within which this music can exist on its own terms. This program of a particularly spectacular corner of the repertoire, performed in fine style in a more than fitting space, was a pleasure of pleasures. Even without all that it would have been worth the price of admission to hear the tenor soloist, Christopher J. McCafferty, sing "Ave Maria" just once. Wow. 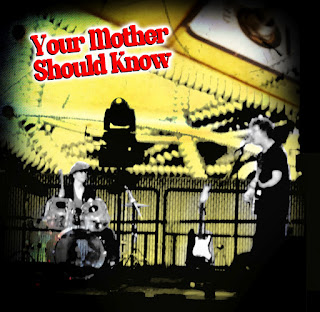 By way of full disclosure: my beloved spouse Karen is the drummer of Your Mother Should Know, and her brother and my long-time collaborator Neal Meyer is guitarist and lead vocal. Consequently I have a hard time listening to them without being terrified of a disaster. Essentially I'm far too close to them as people to really hear what's going on. Even so, I was proud of them. There were some technical problems - a loud hum from Neal's amp - that precluded the use of one of his pedals, but all in all it went spectacularly well. That Seattle garage sound in all its earnest glory.

The Tailenders (fallen glam?) and Youth Rescue Mission (Pan-Northwestern Blues-Pop?) both checked in with fine performances, the former notable for some imaginative keyboard work, and the latter for clever lyrics and for trading instruments around the horn every few songs. Both bands have albums available for download. And after payday . . .

It is always a pleasure to hear Curtains for You. They are an energetic, feel-fabulous, ultra-smart, bouncy bunch of bros. Deep with eye-candy for the ladies, they are always just having the best time ever, and sharing it. I've blogged about them before and no doubt will again.

This was the recording I made of YMSK's first gig last June. Although Karen wasn't part of the band yet, her drums made a fine appearance under the sticks of Matt Ferbrache.

Makes up in clarity what it might lack in gravitas.

The drummer knows his rudiments.