It is made of, apparently, briskly alternating rhythmic-harmonic states; larger groupings articulated by stepwise ascents; and some gentle hipwise accents that play off that. Love that low "Luuuhhve . . . " in chest voice.

Her voice track is calibrated just far enough down in the mix to sound vulnerable, the sexual persona situated just so, unthreatening, fixed forever in place with all the power of the music-industrial complex. She is what the business wants her to be: a target of social projections.

Karen and I played a small part at the end of this production, aiming spotlights at Neal as he circumnavigated the space while performing The Ballad of Persse O'Reilly, shadowed by Jake Thompson playing bodhrán. The staging was less elaborate than last year's Chapter 1, but it really doesn't need much. He performed the greater part of it off to the side, allowing his amplified voice to occupy the dark stage alone.

Subject matter: How harmonies arise from melody's twinings, and how they persist within their further twinings.

Pleasing to the very end.

A clever, attractive little piece from early in Stockhausen's oeuvre, with hints of Monk among his own clearly emerging voice. It is a short stylistic step from here to the music box pieces.

The murky motor rhythm strenuously fails to hold things together, threads slip out on their own cognizance - things to do, places to unravel.

Strong keyboard gestures predominate. In the middle, suddenly, emerges what is about the most effective use of non-standard (inside the piano) techniques I can easily bring to mind, subtly integrated with some exquisite pedal work.

This was from my recital, Preludes in Seattle, of June 10, 2006, at University Temple United Methodist Church. I first encountered Greg Short in about 1970, when I performed two of his teaching pieces, Knuckle Rag and Little Rose, at a concert sponsored by one of the local music teachers' associations. His preludes are thorny pianistic puzzles in the Lisztian stamp. For a pianist of my modest technique the experience of performing them can be terrifying, but listening back after nearly a decade I find the pieces themselves to be quite attractive. I just wish some better pianist than I would pick these up and work on them. Though difficult, the piano writing is deeply intelligent, always effective, and well worth the trouble. Cristina? Tiffany? Julie? Adrienne? Anybody?

You and Your Folks, Me and My Folks - Funkadelic [collected from Dave Marsh's Heart of Rock & Soul]

The backing chorus arrangement features impressively reckless Bach-like stretto, ultra-quick, and is that ring modulation I hear on some of those bass tones? Gobs of great.

Give me some of that [fill in the blank] music: a trope of reflexive self-advertising by which popular music never ceases to tell us how much we should love it, from Alexander's Ragtime Band to Roll Over Beethoven. Apparently we are all and have always been just completely OK with commercials for a product embedded in the product.

Solid, tense, immovable. Not turned to stone, but jammed tight in the pile-up of its own mirrorings. Brief as Webern but battled, recklessly muscular.

The microphone placement leads to an odd balance, with the baritone part way up front and everything else variously behind. One imagines a live performance would sound completely different, but here it becomes a very strange piece of music indeed. The piano, when it breaks in, does so in a completely different tempo than the singers.

Bartók's piano style is overtly orchestral, and so one could regard these literal orchestrations as lessons in how to play the piano pieces: play this tune as though it were an oboe, play the accompaniment like soft strings - keep the voices clear!

At the end of the first long phrase a chime rings out alone in glorious chimey dissonance, uncompromised, physical, present. From that point on the music prolongs the sensibility of that dissonance, carefully weaving its chromatic counterpoint. This focus drops in a few places for some 'happy southerner' hokum, which I suppose might be read in a similar way to some of Shostakovitch's contemporaneous satirical romps. I'm not sure I buy that here, but am willing to pass over it anyway for the long moments of really stunning stuff.

Posted by Keith Eisenbrey at 2:06 PM No comments:

For the most part this was a very easy recital to like. Ms Avdeeva plays warmly, clearly, and with a flexible imagination. She didn't get in the path of the magical way Chopin has of making the performance hall disappear in favor of a created space within the music. The Prokofiev is perhaps a bit long for itself, but I was enjoying the way bits of revery would calve themselves off the main event, splendid discards.

For an encore she played, if I am not mistaken, Chopin's Grande Valse Brillante, op. 18. I may be mistaken because when I got home to check I realized that all the waltzes sound familiar, and I couldn't distinguish between what was familiar because I had just heard it and what was familiar simply because it was familiar. At any rate, she played this far too fast.

The increments of sequence tested, pulled up against, brought up short again and again, tolerances stressed.

Something grand approaches, or we approach amid grandeur, in the exuberant throws of a surgent culture. 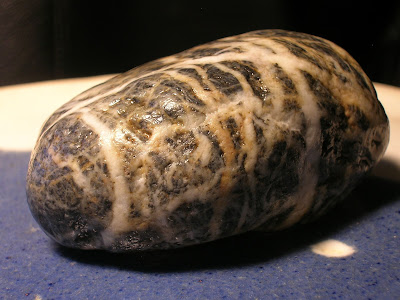 The blues artist Jarod Yerkes, in performance as SmokeStack and the Foothill Fury, would, at seemingly random moments, explode midsong into finger flying guitar riffs, explaining these, plausibly, as "guitar Tourrettes". There is something similar going on here, the lyrical passages taken over suddenly by shameless contrapuntal workings out. It is as though, in singing, he suddenly became interested in and completely distracted by some technical detail in the figuration, losing track of the phrase he was presumably articulating.

When I was an undergrad at the UW way back in the way back I got roped into the opera chorus for a production of Rusalka. I believe that my abilities as a sack of meat of the tenor persuasion were alone responsible for this, my operatic debut and finale.

Nobody - Bert Williams - [from Alan Lowe's Really the Blues]

I have three recordings of this piece, and you can read my earlier postings here and here. This time around I was thinking about a side effect of massing instruments of a type into a single section, first and second violins, or choral sections, for example. The sound is glorious but the performers vanish as individuals. Is it worth the trade-off?