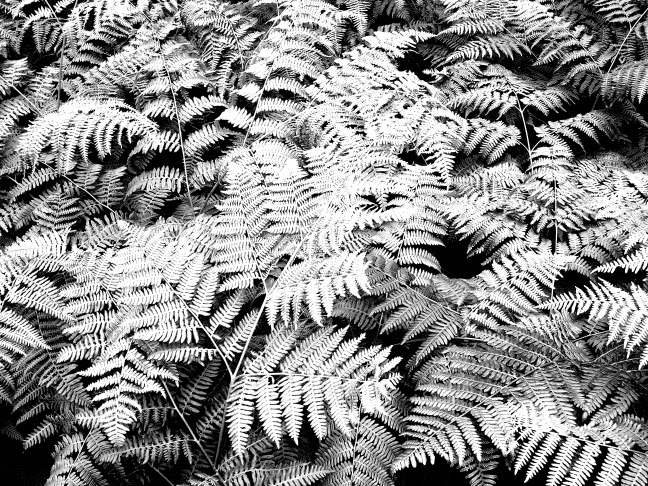 Up front there are three strands to the sound. The first is a throbbing resonance, like the last moments of I am sitting in a room. The second are voices whispering what we discover to be the common names of ferns. The third are voices singing what I soon guessed (correctly) to be the Latin scientific names of ferns. The singing voices join together variously in duets and trios and such, studiously paced from few at first to many at last. Words with and without voice. The shape of mouths's chambers speaking with and without sustaining resonance, sustained on a chamber's resonance. Whispers brush against our skin, familiarly.

A single utterance, in parts indivisible.

This week I improvised on my big piano.

For many years each of Neal's Gradus sessions has consisted of two 20-minute parts, or rungs. This is done in order to speed the progression through the combinations of notes. When he got finished with all the combinations of A-naturals a decision was made to select at random only certain combinations as each new note was introduced. The global effect is to exponentially increase the rate at which progression is made, in the hope of getting to the final combination of all 88 notes at some point within our lifetimes. The last rung of this session consisted of all the A and E naturals. Next up, so I'm told, is C-sharp.

Listening to 40 minutes of A and E I find that my hearing quickly forgets the pitch-class distinction between them. I don't have perfect pitch, and I find at some point, if I want to know whether a note that Neal is playing is A or E, I have to figure it out, usually by discovering which end of a 4th or 5th it's on. I found it interesting how easy it was to treat all of them as being just a single pitch class consisting of all A's and E's - structurally identical at some level. A particularly warped kingdom - a lumpy geometry of pitchspace.
Posted by Keith Eisenbrey at 4:07 PM No comments:

My new working theory of listening to Puccini: everything you hear is a cinematic close-up, hence the hothouse claustrophilia.

Aside from being a great line-up, this was the album release party for Your Mother Should Know's debut album Rocks and Glass ($7 to download at Bandcamp), and so a bit of history is in order. YMSK consists of my long-time collaborator and brother-in-law Neal Kosály-Meyer and his sister (and my spouse) Karen Eisenbrey. Neal met Steve Fisk (now the keyboard player of Can You Imagine, and well known in the music business as a producer) during his stint at Central many decades ago, at some point even convincing his other sister, Yvonne, to hire Steve's band to play the Bickleton HS prom. In the early '80s, at about the time I met Neal, he had joined forces with Karen and Yvonne to form a band, The PK's, that was all the rage of their living room (famous for sofas around!). Yes Neal, I have the recordings.

This is the second time that YMSK has followed Dead Bars on a bill. The first time being DB's first show at the Comet in March of 2013. This is also the second time they have been on a bill with Tom Price Desert Classic, having previously joined them at the High Dive last April.

Each go-round, and it does go round, this 35 second film is a bit longer, a bit deeper, a bit more lovely. I watched it about six times.

More and more I find that Nancarrow is less and less about sheer play-ability than about precision - about the exact color of when.

The juxtaposition of Brakhage and Nancarrow highlights a common element of their work. Each of them has endeavored to scrape the barnacles of collaboration from their respective medium, accepting a tedious work process as the price of liberation from compromise.

Waves of shifting and out-of-phase senses of momentum create interference patterns in a realm of perception otherwise unimagined. It is as though we are discovering a form of cognitive sub-harmonics. Any moment is believable as start, or midst, or end.

I had listened to this piece back in 2002, at which time I wrote in my journal: "texture is complex - as to rhythm and accent dynamic - but fairly uniform as to depth - i.e. - 1 to 4 or so notes at once - as simultaneity - or 0 to 4 - very clear pedalling - attack characteristics are echt Stravinskian - percussive, very clear as to - what? fingery rather than fisty. Treating piano as a tone(note?) producing body, rather than as a soundboard. articulate clarity."

In the film Little Big Man, Old Lodge Skins, upon finding himself still in this world, groans "Well, sometimes the magic works. Sometimes it doesn't." For my money, the magic was working the night we made this tape. Sax, cornet, and piano, neither quite duking it out. Percussion is the forest in which piano is the damp.Slipping easily from transparent sound to transparent sound, exploring the public of itself, dis-staged. Contiguities linger, but don't overstay. We enter of thickety meadow of ukeleles and zither.

Second Time Around - The Mexican Blackbirds [from The Funhouse Comp Thing]

This week I improvised on xylophone.

Aaron sent us his wash cycle.
Posted by Keith Eisenbrey at 4:51 PM No comments:

A year ago in September we caught this classy act at a little winery in Langley and it was with great delight that we find them now a bit closer to home. Siri is a cousin of mine, sharing a set of great-grandparents on the McAbee side. They play a selection of '60s hits - Paul Simon and The Beatles are prominent - as well as some original songs. The volume level is grown-up low, the vocals are supple, un-pushed, and well balanced. They blend easily with the intricate instrumental arrangements - cello and guitar both playing off and deftly imitating each other. A wealth of sound in 10 strings and a bow.

This is safer as a symphony than as a dinner party. They're everywhere! Nervous jitters, sliding off the table from nowhere, repeatedly. Taking runs at what starts as somewhere, were it not for it going on to where its going on is the subject. Long wandering lines of thought turning vaguely pressure cookery. Gonna blow!

For listening up close. Every size of joint and color precisely measured to fit and tell. Strenuously carrying the Vienna torch.

It was probably at about this time that I first saw a synthesizer in person. I was in a high-school music class (rumor was that the Wilsons had gone to Sammamish also) and a recent alum who was studying at Bellevue Community College brought one over for show and tell. I don't remember much what I thought of it then, but the sound of the synth on this track can't be far off from what I heard. Unfortunately the "gee whiz kids listen to our new synth" spotlight doesn't fit very smoothly into the mix, marring an otherwise terrific sound. Such were the times.

With a limited but luscious vocabulary of (guitar?) sounds Fripp renders digital delays archaic 10 years before they were invented. Its activity is to find the music inherent in an apparatus where the apparatus is defined to include as an essential part the personality of the operator. Like Cage and his notations.

Improvising on tenor banjo (four strings, tuned like a viola, C, G, D, A). I am quite pleased with my electronically 'rubbed' version, so I thought I'd share that one on my Soundcloud site.

I want that first chord! Neal plays two 20-minute rungs each session, each rung a different combination of notes. He is at a point in the project where nearly every A-natural and E-natural are in play - a plateau of riches where internal distinctions subsume global progression. Temporally local subsets within each rung that are distinguished by number of tokens come across as being different not in size but in focus - narrow or deep.
Posted by Keith Eisenbrey at 11:52 AM No comments:

Our friends from Zimbabwe are off for Norway and gave our church a wonderful little concert as a farewell. They perform intricate arrangements of traditional and quasi-traditional songs accompanied on kora, mbiru, djembe, and shaker. An hour and a half is too little time, but we heard some wonderful sounds from a place where music seems to still be people-sized, easily at home with folks rather than held close by an industry of experts. We will miss them much.

Ensemble: 3 string basses and 4 saxophones. A solid sound from which globules emerge and swerve, splinter and glint.

Ensemble: voice and piano. A song steeped in the excruciating intimacy of an old family letter.

Plays solo saxophone. Explores the lyrical possibilities of sounds that hover between timbre and chord.

Frog sounds imported from a Bali rice field anchored in our space by precisely rung notes on the piano, high and low.

All singularities brachiate in grains and veins of quartz. The question attempts to drown itself in its own reiterations.

Fighting an incline of its own devising, every growth a decay.

Industrious agents, working in a space removed, build motor segments from narrow populations of durations. Relations flash across the surface.

We creep back into the disconcerting day, into the glory of the new normal. Our hope is examined in the harsh light of war. We make what we can of it.

I discover that the last time I listened to this piece was also on a January 6, back in 2003. In  my journal I find: "Each idea has an ubiquitous shadow."

Up- or other-rooted architecture. Feast macabre. Great effort is made to be what one always was, though nothing is left unwarped. Ravel re-inventing himself from recalcitrant scraps.

I started another cycle of instrumental improvisations and attendant digital manipulation on the bass guitar I have on long-term loan from Steve Kennedy. Folded means I cut the sound file in half and layered the second half over the first. Rubbed means I took the folded file and ran it through a digital effect to see what would come out the other end. I'm still not sure about the results, so I'll just share the folded version.

Posted by Keith Eisenbrey at 4:08 PM No comments:

Proceeding in fours and fours unpretentiously, unprofound, in delight, foursquare rationality leading us methodically to an exquisitely decorated depravity, upon which the curtain falls. Whip it up!

Compared to the Schönberg this is a bit less like being trapped in a contrapuntal sardine can, but only a bit. The key it's in is only a pretense: the actual tonality is a function of the set of keys alluded to in immediacy. Linearity twisted, nearly tangled.

This music imagines objects and places as anthropocentric repository-presences. They have gathered up their history with us and speak it back to us from within their own shape and condition. The world sings back to us only ourselves, blindingly.

An old comfort all cleaned up and shiny like new.
Posted by Keith Eisenbrey at 5:08 PM No comments: