Neal and Karen share the bill with some exciting young bands. The show will feature the debut performance of Neal's freshly acquired 12-string, and a new tuning of Karen's venerable Ludwigs.

The stage was full of chairs, and later of young people dressed in black. Surely this mass of twenty one string players and a wind quintet is the largest ensemble gathered at the Chapel to date! Before even getting to the music, plaudits must be given to John for sheer organizational bravado.

The piece consists of 45 minutes of lusciously resonant hush - never rising much above pianissimo, rarely a single voice asserting. It was as though they were each playing out only enough for their nearest neighbor to hear. To the audience the sound was communal, but not blended into a singularity, richly detailed from top to bottom and from side to side and from then to now to hereafter - undulatory but not squishy, focused to the nth degree at all points possible.

Strangely, I kept thinking about hierarchical systems - wherein the smallest details are of least import, wherein the uncountable surface is mere accident, and wherein the crucial matters are the big changes of mass to mass, where the fewer times an aspect changes the more that aspect rules. Here all that is upended and shattered. Here the image is of a solid time-mass of surface.

It is tempting, while listening to musics at a significant cultural and historical remove, and especially while listening to them in more or less chronological order, to place them in a progression, so that their divergent and convergent styles tell a story. We started here, we added this, we got to here. In such a story, Schütz shines as a brilliant figure in whose music is embodied a struggle between the subtle choral homogeneity of the Renaissance masters and the robust dance rhythms of the late Baroque. From moment to moment the ground shifts beneath us, as unstable as Mahler but without the self-absorbed hyper-dramatic camera angles.

Posted by Keith Eisenbrey at 3:50 PM No comments:

I have sat in the tenor section of our church choir with Dave Campbell, the banjo/bass player and occasional vocalist with Back Burner, for more years than I care to acknowledge. His bluegrass/swing outfit doesn't get into town very often, but it is always a pleasure when they do. What struck me most on this lovely evening, the big doors open to a quietly humming Stone Way North, was how well balanced the blue-grass string band is as an ensemble. Guitar, dobro, upright bass, mandolin, banjo, and fiddle - or nearly any subset thereof - forms a mixed choir capable of remarkable subtleness and astonishing supplety. The prevailing performance practice valorizes the collective mix, rather than the strutting soloismus of many another popular idiom. The pleasure is in the playing with, and in the sharing with.

Crystal sparks: each note from a different cognitive plane, only gradually, and partially, coalescing.

From this distance in time, after free jazz has developed itself for decades, it is hard to recognize this as much more than some really great players barely managing to poke their toes into the pool.

Trying to keep it heaped. Knocking it together.

September 12, 2012
Three Chapters from the Book of Dreams - Richard Boulanger

String sound (live violin?) with heavy reverb & electrosound finds a trajectory moving from ordinary music, or like ordinary music, to space-age. It is finally taken up into the hold. B'bye!

Assembly Rechoired is any improvisation made by Karen and me that doesn't also involve one of the other founding members of Banned Rehearsal. A sizeable number of the sesssions were made in the late 80's when we were left holding down the fort in Seattle while Neal & Anna started their family in San Diego and Aaron was at school in Berkeley.

On a perfect Saturday afternoon we sat on the grass in the shade sharing excellent El Salvadoran Pupusas and enjoyed this fine local souljazz outfit. I believe this is the first time I have heard an instrumental cover of the Lennon/McCartney song The Word, a song so precisely of its era that it sounded dated within a week. And yet, turned just a bit to the side and it became a Chicago-pop nod to Miles Davis. It got a bit warm for us, so we took a bus downtown to catch the last day of a gallery show only to find the door locked. So instead we stopped in at SAM to see the exhibit of Australian Aboriginal art. If you missed it, like we almost did, you missed the loudest music ever seen on Seattle walls. Ear purge jacked in through the eyes.

This show ran from noon to midnight, and included performances of Solo for Sliding Trombone, Empty Words, Indeterminacy, Sonata for Clarinet, Writing for the Second Time Through Finnegans Wake IV, and In a Landscape, all by John Cage, and Seattle Environmental Recording by Doug Haire. We were able to attend from just past 7 to just past 9, hearing some of Neal's intonation of Empty Words, some of Roger's readings from Indeterminacy, and also his performance of In A Landscape. I scribbled two and a half pages of notes, consisting for the most part of an unsuccessful attempt to figure out how or why emptying a word would be a good idea. For my part, emptying a word of meaning is the same as emptying out my responsibility from my utterance - as though emptying myself of ego would render me innocent. I'm not buying it.

For all that, the event was an heroic effort and I heartily thank all those involved for this presentation of some of Cage's thorniest expressive artifacts.

Matthew Briggs had the first presentation, but since I was up next I'm afraid my brain was not fully engaged. His piece opened with canned crickets, into which big bass-y piano sonorities were ladled, with slow violin and cello. At the end the drums played a slow beat, as though descending into prog rock out of a thick fog.

I performed Preludes 9 - 16, from my 24 Preludes for Piano. The score is here, and a recording of the entire set is here on my soundcloud site.

John Teske presented a short version of a long ensemble piece that will be performed whole in a few weeks. I was still post-occupied with my own performance (the real drawback to having a piece on the show) so I am eager to hear the whole thing with the full ensemble. It is interesting how, in working largely with textures and transformations of textures, this piece throws into relief an aspect of music that is otherwise often overlooked, and which is completely and pointedly absent here: any image of number and quantity. To steal a turn of phrase from J.K. Randall, it matters a great deal that counting things does not matter.

An interesting disjuncture between the textural rhythm and the harmonic rhythm.

An early thought about how to record a Your Mother Should Know song, all parts to be performed by Neal. I think it got as far as these 60+ minutes of drum tracks. 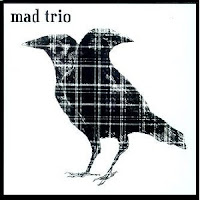 An earthquake turned sideways. As though attempting to conjure a Machaut motet as an exercise in free jazz.

A study in the liquidity of steady states.

For the most part each sticking to a single station, if not a single instrument: Karen on drums, me on guitar/piano/percussion at hand, Aaron on trumpet.