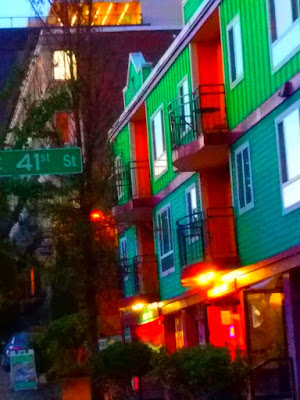 Gradus: for Fux, Tesla, and Milo the Wrestler (318) - Neal Kosály-Meyer

more distant sound because the source is within another

That sound they are all after - just so balance, just so orchestration - is a focus of collaboration. The fact they're in it for the money takes away nothing.

The wacky bad transfer sound (from vinyl to tape how exactly?) nearly overpowers the music they thought they were making.

This was the second of two sessions we did at a group home for middle-school aged boys who'd run afoul of one thing or another. We gave them encouraged permission to shout and shriek for 30 minutes. They manage quite energetically for quite a while before they begin to fade back, vocal production being work.

If a tricked out madmax car with all its enormities were a sound.

fill the tape or else.

This song has been knocking around for a good while to be nailed by RH.

Drumming and knocking pitch and resonance narrowly considered, then Wallace the spinet joins the discussion.

Featuring my favorite rhythmic transformation of the subject. Why? Because it is so entirely designed not for it's own sake but so that the music springing from it can do that thing he then makes it do before he ties it up in a fancy knot.

Completely overwhelms the recording device, there is much more there than could be captured, just a hint of a pounding upon sharp unyielding skin.

All over the map piano backdrop to be answered :: over before you realize what they just have done to you.

Every note tells.
In which: loins are girded.
Gaining entry ain't easy and ain't gaining either.
Each approach, though nearer, is less nearer than the last or any.

Two roles: fast note role / slow note role. The voices switch. The action is all in the handoff.

Within the larger ritual of any mass are subrituals of affect: where the fugues are; the play of solos, ensembles, and chorus; what sort of music the et incarnatus is; how to set up and word paint the et resurrectus. Haydn had this stuff down cold and played for keeps. It is this example, no doubt, that kept Beethoven looking over his shoulder.

August 15, 2017
He Likes It Slow - Louis Armstrong's Hot Five with Butterbeans and Susie [from Hot Fives and Sevens]

Yep. It's about sex.

This one too, but on top of the fine playing is a subtly organized harmonic rhythm.

Suggests the tune, then riffs on the suggestions as though they had been the song all along.

Prog jazz? Classy and upscale at least, nothing jolts. A table in this joint will set you back friend.

No past for lingering, no time for it. This boat moves.

Sound so dry and studio controlled it's as though there is no room in which this music sounds. Kind of creepy.

It strikes me that HP is, as a theater composer, heavily invested in the Wagnerian ideal. The music and the theatricality are irretrievably intertwined zusammenkunstwerklich. That and he clearly wants this music to transform you, radicalize you. He fairly shouts it. He offers music criticism in the form of music theater. The subject matter is everything classical, everything of which he is ostensibly not in favor. And it's fabulous too.

Playing the jongleur, quite well too.

The anthem that could have been subsides into bluesy noodles, not unpleasantly, but it strikes me now as distinctly less weird than it did back in the day. Boys taking their gear out for a jam.

The measured trill that opens this slows, as though feeling the resistance of muscle and tendon. A truly amazing pronunciation of "Ruin", with a complex diphthong and an extra R sound, almost like "rühren".

A tip of the hat to Art "now-which-song-was-I-playing-anyway" Tatum. Probably up there on Cecil Taylor's playlist as well.

Just how many complete short stories can be told in 2 minutes 30, with no hurry? 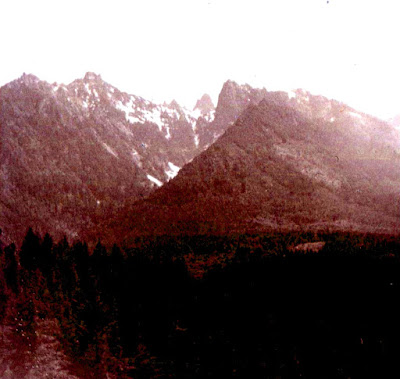 The body's struggle to speak, tell, mean, sing. After each "parole" a variety of laughter, separating lexicon from unconscious response. Classic analog synth sounds bring warm feelings to my heart.

This is what I wrote in my journal though I'm not sure now what I meant: "deflection use is reflection use :: a trick, but he writes so well as a voice."

These folks like analog synth as much as Berio did. Ann's voice powers up in unexpected corners of her range.

Recorded live at Brechemin Hall, University of Washington, School of Music, as part of Neal's recital on May 22, 1981. As I was listening our smoke alarm went off (something baking) as an outside surprise that worked well inside what we were doing.

August 8, 2017
Guess I'm Falling In Love - The Velvet Underground [from Another View]

Yet another stranded instrumental track.

Picks up in mid-scribble. Overdriven jingle bells. Tape, and it was tape then, is an object upon which to inscribe sounds, getting as many on there as possible, outcome as a music not so important as chucking it all in there so that any moment might flame. Waddayaknow! Bob Priest, on the radio, gets into Banned Rehearsal history. We do not hold the niceties of sound engineering in regard at all.

In which it is demonstrated once again that the ability to speak can become an attractive nuisance.

I was working on a piece that, by this time, was known as "Work Architecture Unity And The", 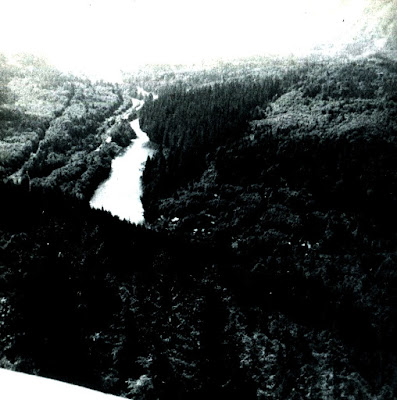 hoping that it would be a thing that the banned could play as an ensemble. This was a go at one version of it in which I had stipulated categories of sounds to be piled on top of the scraps I had composed for solo piano. At the time I ended up being frustrated that the sense of spacious time I had envisioned as the distinguishing feature seemed to be unreachable as a group project. Looking back on it now, I probably should have let the collaboration run its course and see what happened. Each scrap/soundglob, though misbalanced, was quite nice.

Birthday - The Shackles [from The Funhouse Comp Thing]

Mildly amusing in a sophomoric way.

Early in 2011 Ben emailed this score to us - a memorial to Milton Babbitt based on Donne's "Death Be Not Proud" - hoping that we could quickly manage a recording for a symposium he was attending in February. I'm usually up early so I woke Karen with the news that Ben had sent us a song that would ruin our marriage. It didn't, though it was a struggle for both of us to learn it so quickly. We ended up recording it one page at a time, stitching it together later. The balance is horrible (I only had one good mic), I couldn't get the quick bits quiet enough, and the vocal part is at the absolute bottom of Karen's range, but the recording still gets much right on - notably the fraught struggle to leap half-steps in the first few pages. Never did such narrow intervals seem so impossible a venture, like passage to the moon, irreversible.

If I'd Been Born In Another Place - Denise Glover [from Pathways]

A loving toast to how it turned out, with string band balanced to perfection.

A path not taken: Retro-Gradus (start with all the notes.)
Posted by Keith Eisenbrey at 3:06 PM No comments: 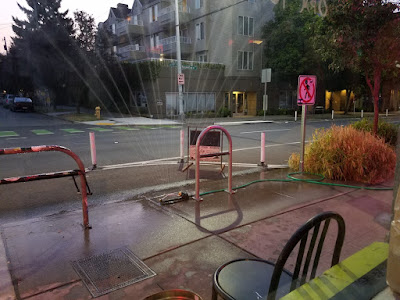 Anyone is there for their own reason. Not the sort of evening that could possibly be composed though there was composition in super-abundance need I only mention the fine sequence of tempi rung by each group like a Haydn oratorio nor the sort of evening that could possibly be planned though there was plenty of planning and plotting and wheeling and dealing in gigs here and there and of course the whole business plan of the venue to stock and staff the bar and kitchen clear the tables turn the sprinkler on just outside the door [¿] how friendly is that [?] the music of the table chatter and dance of the crowded flirting every bit as engaging as and did I mention how much fun the bands were having just being an event or some to which anyone might gather for their own reason what I mean is this sort of evening as an event in itself must simply arise there it is. Gives me faith in music it does.

Within the conventional figurational schema: attention to details, to the balance of registers, to clean articulation.

Concentratin' On You - Connie Boswell [from Alan Lowe's That Devilin' Tune]

Room for a dance number in the instrumental choruses.

Boogie Woogie - Count Basie [from The First Records He Ever Made]

The staccato hits are echoed in the staccato run in the piano. A vocal ornament: quick wide quasi-appoggiatura (3rds and 4ths, I think, rather than steps), it is playfully placed within the meter.

The notes within the different chords don't talk to each other across the bars in the way they might in classical tonal works. I'd like to think they do, but that we're not hit over the head with it, but I suspect that's wrong too, and listening that way is simply an error.

In terms of musicianship (the alternation of 3 feel and 4 feel) she tends to be a bit of a show-off. If you got it flaunt it.

I can't help but wonder if the engineering of these was done with car radios in mind. Was the point of selling songs to the radio station simply the selling of radios? Quite a nice song though.

4th Time Around - Bob Dylan [from Blonde on Blonde]

Deflecting sense, words become a matrix of they mean what you want them to mean.

It might be trying to be a Paul McCartney song, in the Honey Pie mode.

Being not quite a fast dance and not quite a slow dance, it requires negotiation, like gender.

Karen brought this album into the family in the form of a trackless cassette.

We must have planned to start together, Neal and I. (d)(e)-volves into a couple of sudden songs (that being what we were doing at the time) including a version of Ain't No Easy Woman with a verse I don't remember.

as if recorded from inside a can in the next bar over. luscious!

Close surgery, radio beepings are the monitors, one by one they go off revealing at last the flutter beat of a bird's heart. Universal time. At the tone the time will be.

A midi rendition of my organ prelude based on the hymn tune FOUNDATION. Throbbing and twisted.


I introduce the players, and then thunder introduces itself. Rain on roof gentle, as though attempting to make the least sound possible and still be what we do.

Here In My Bed - Rachel Harrington [from Celilo Falls]

Not goodbye not hello just the fact of changing. Her vowels thin themselves unexpectedly, drawing you in closer by finesse.

Making a new time of a pile of times.

In which Haydn demonstrates the necessary care to be given to composing each measure. A continually shifting array of forces, the sort of thing that might have made Elliott Carter just give up.

I need a word that combines the notions of portamento and diphthong and a fiddler's touch.

Evenin' - Count Basie [from The First Records He Ever Made]

The beat and the meter meet at a slant. Don't stand still or you'll slide right off the edge of it.