Recorded
January 19, 2014
Keyboard Sonata in C-sharp minor Hob.XVI:36 - Haydn - Christine Schornsheim
As though cut into pieces and jumbled back together. Blown away by the tricky metrical scansion in the 3rd movement, we are knocked off our balance and led to the edge, where we remain,
Banned Rehearsal 56 - Keith Eisenbrey, Anna K, Karen Meyer, Neal Meyer - November 1985
On occasion one of our less formally improvised sessions manages to succeed in some pretty amazing ways. The instant example is occupied mostly with a slide show and its attendant conversation. At that level it manages to be among our least smart-ass talky-tapes, and as a consequence is quite a fine snapshot of who we were and what we were like back in the day. On a family-business note this is particularly fun because it was made just a month or so before Karen and I made it clear to each other our mutual smittenhood, and you can certainly sense a more than a little flirtation in the air. But as Neal begins to layer in several other sessions, including the internally infamous Banned Rehearsal 12 and the less infamous Banned Rehearsal 44, with its own slide show and commentary, it becomes a wonderful study in the dynamics of recorded presence. In the end the dinosaurs swallow us all.
January 20, 2014
Foliage (live recording of playback) - Aaron Keyt
This electronic work opened our concert at the Chapel in November of 2010. The sound of it, as recorded in the space, is a pointedly immediate image of the tiny, the delicate, the close-focused, measured in millimeters from our ear. A tam-tam-y interlude at a great distance, across a chasm, marks out an extraordinarily specific stance of relative points in space. It is as though, with ear alone, we directly perceive the vector between them: concrete, immutable, impossibly precise.
Keyboard Sonata in D Major Hob.XVI:37 - Haydn - Christine Schornsheim
Eethoven - Tom Jajdu, Andrew Milburn, J. K. Randall - (from InterPlay)
big circles
muttered musical analysis clipped space radio chatter
freefloating atmosphog
back earthly metamorphosed
discourse :: continuity
moving alongness
stuckness
sight-seeing examples pasted SPLAT!
"you can't put those next to a fughetta with an H in it!" (JKR)
In Session at the Tintinabulary
January 19, 2014
Banned Rehearsal 851 - Jenny Chung, Karen Eisenbrey, Keith Eisenbrey, Aaron Keyt, Neal Meyer
Upcoming
March 7, 2014 - 8 PM
Seattle Composers Salon
Chapel Performance Space, Good Shepherd Center, Seattle
I will be performing Aaron Keyt's Sonata (2012) for solo piano.
April 12, 2014 - 8 PM﻿ ﻿
A Cat's Life Returns Again - a recital by Keith Eisenbrey, piano, with special guest Olivia Sterne, narrator
Chapel Performance Space, Good Shepherd Center, Seattle
Attitude - Doug Palmer
Greek Nickel 2 - J. K Randall
Sonata (2012) - Aaron Keyt
A Cat's Life, a little opera for solo piano (1990) - Keith Eisenbrey
June 27, 2014 - 8 PM
Banned Rehearsal Celebrates 30 Years of Noise
Chapel Performance Space, Good Shepherd Center, Seattle
Posted by Keith Eisenbrey at 2:45 PM No comments:

Recorded
January 11, 2014
The Promise - Bruce Springsteen
I was out of town on business most of the week, so I didn't get much listening in, and this long album of also-rans doesn't provide much to work with. For the most part the arrangements fall back on Bruce's perfunctory trademark sound - every thinning of texture is a setup for the next goose of energy. The songs that stood out for me were the one's in which he stepped out of his usual mold: the surfer-rock Candy's Boy, the Elvis-impersonator version of Fire, and Ain't Good Enough For You.
Posted by Keith Eisenbrey at 1:43 PM No comments:

Email ThisBlogThis!Share to TwitterShare to FacebookShare to Pinterest
Labels: Bruce Springsteen, The Promise

January 4, 2014
Banned Rehearsal 55 - Keith Eisenbrey, Anna K, Neal Meyer - November 1985
tuning or just plucking - talking - moving microphones
heater expanding sliding down onto a Steady Rhythmic Texture
(problematic because SRT is hard to stop - SRT precludes a choice)
lo and behold the whole becomes more invested the moment SRT does finally stop
but Wild Thing (Neal) intrudes again - De Imitatione Troggi
once that is over the sound in progress re-emerges
then Anna gives Wild Thing a come-hither slant - probably the best performance of them all, if that is what we wanted
at the end we construct a din, whew!
January 5, 2014
Gradus 183 - Neal Meyer - November 2010
Gradus concerns itself, through the entire expanse of its conceptual scope, with a dialogue about identities. At it's root end, the tokens of identity are individual key strokes, conversing in series and in conjunction. Each sequent decision builds, over time, a field of variations, and, over bigger time, larger-scale fields of variations of fields of variations. But all is seen from the inside, the shape of its experience forming itself like the trace line of single starling in flock.
Sonata in D K.284 - Mozart - Mitsuko Uchida

January 7, 2014
KEE JR 851114 - Keith Eisenbrey, John Rahn - November 1985
I remembered making this tape at John's house but I had forgotten, or didn't realize then, how fabulous it is. Admirably minimal and transparent, with a lovely soft hum that morphs as we move about - a commentary on the shape of the space. It is really two separate sessions, the first and longest with small instruments (monochord? ocarina?), and the second on bassoon (John) and cello or bass (me). If my memory serves me correctly it is also the first time I heard a CD. I believe the music was by Janacek.
Agogic - Andrew N. D'Angelo, Cuong Vu, Luke Bergman, Evan Woodle
A crack team. 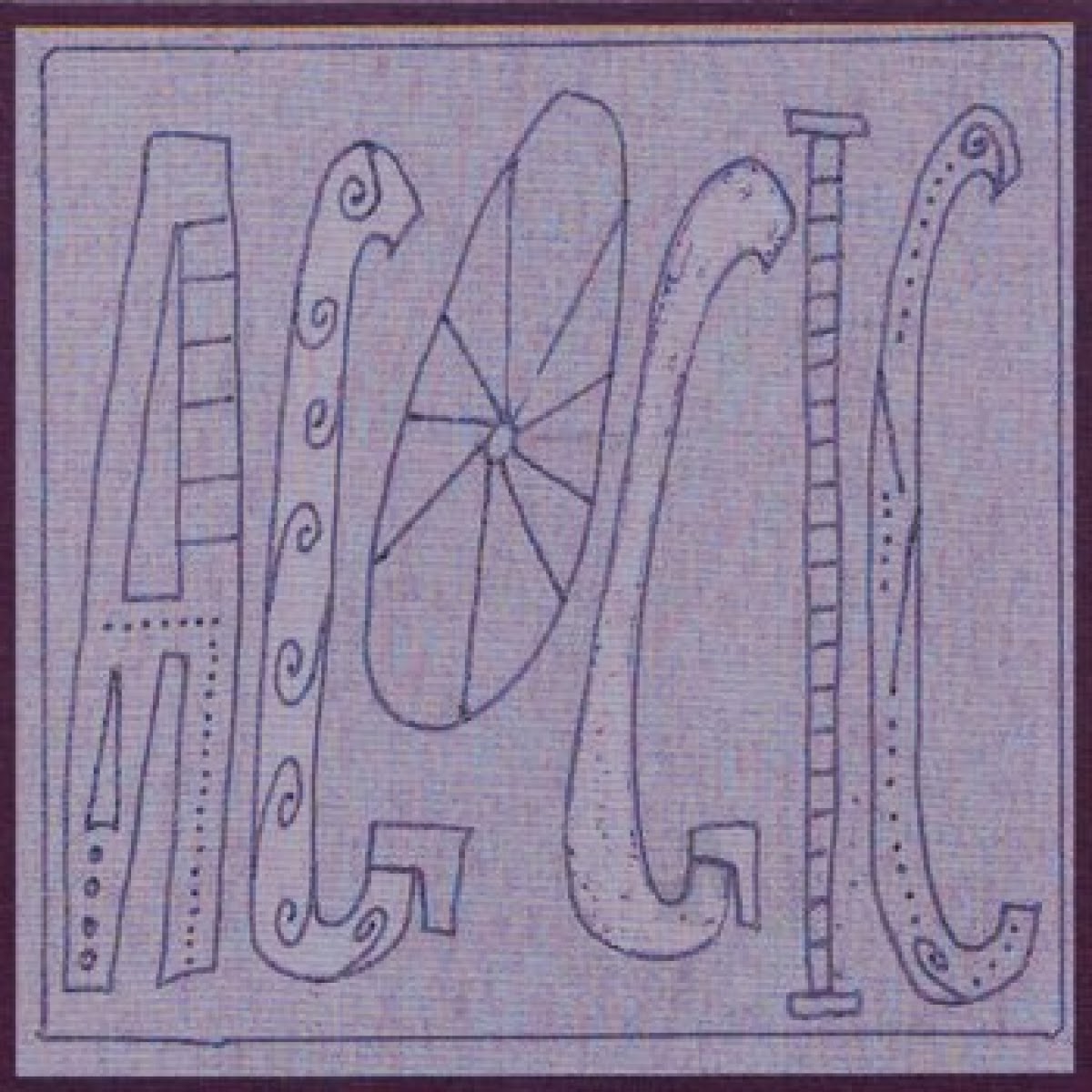 Mission: to instantiate through independent cooperation complex environments in which individuality can emerge, but never as the whole of the whole.
Some notes as it went along:
1. bass drum heavy parallel play short hockety interlocks
2. quick hyper
3. slow reverbery
4. crack team, see above
5. lyric (drumming mirrors amplifies comments textures
6. starts like R&R but trips, trips, trippingly - like an extended Buster Keaton riff
7. receding back into the past
Keyboard Sonata in C Hob.XVI:35 - Haydn - Christine Schornsheim
figurations distracted to find themselves of a sudden wearing new clothes.
January 8, 2014
Banned Sectional 18 KEE NWM - Keith Eisenbrey, Neal Meyer - November 1985
Starts with some texts: If I Am A Fishy Thinker (with commentary), then some freeform, and then we rehearse Neal's Three Songs, finishing up with yet another Wild Thing.
In Session at the Tintinabulary
January 6, 2014
Banned Rehearsal 850 - Jenny Chung, Karen Eisenbrey, Keith Eisenbrey, Aaron Keyt, Neal Meyer
We welcome a new face.
Posted by Keith Eisenbrey at 3:08 PM No comments:

﻿ Any sound is allowed. We choose sounds not usually associated with musical expression: conversation, body movement. Since these sounds are so strongly associated, both socially and biologically, with our quotidian living, it requires a significant mental stretch to hear them as anything but what they usually are. On the recording I hear a conversation, hear the sound of bodies moving, and their specificities as conversation and motion bring to mind, unbidden, an image of the speakers and an image of their bodies in a remembered space. In order to hear those recorded sounds as musical sounds, or as sounds-as-sounds, they must be shorn of these specificities and new specificities must be abstracted from what remains, or the old specificities must be actively and creatively transformed, literally beyond recognition. Until the ligature is crossed the quotidian deafens us.

Visual perception, for me, whether direct, remembered, or imagined, obscures the musical. One of the strengths of recorded sound, as a medium, is its abstraction from the visual, however variously overpowering might be the mechanism of its own production. Nothing is, after all, purely abstract. Ritualized performance practice can offer a similar function. It has this worth precisely due to its familiarity. We've seen it before. We can ignore it now. And so it disappears. One only hopes the residue is music.

Tempo and tone production are geared to a large space. Does this piece really live here?

﻿ Once again I attempt to read and find no voice with which to read. Inflection doesn't help. Makes it worse, actually. Sinks the words deeper into their wordiness. The bare speaking voice is bland and thin. It is only in those moments when what Neal is doing to the reverberant and mechanically regurgitated sound space teases out unique inflections of my syllabic rhythm - against the walls or slamwhap up against its own past - that anything like a gratifying sound emerges. But for those few moments all else is forgotten. Failure in and of itself is no guarantee, but without its imminent threat there are no possibilities other than the prosaic.

With Mozart one could almost believe there is a precedent underlying harmonic text to it all, that both elegant Ursatz and multi-layered, densely cross-referenced prolongation sprang at once, fully formed and perfect, to his imagination. But it is more difficult to believe that he would have cared. The stronger image is of lyric flux from moment to moment: all parts balance, all parts are shapely, their balance as shapely as their shape is balanced. Part answers to part and segment to segment. The goal is to delight, not to arrive.