Once again, Wild Thing appears just about the time we give up on our collective imagination, sealing the fate of the session.

Karen and I won this CD (and many more!) for best costume at the release party at Egans.


(phases into and from):
1 landing arrival stops
2 uh oh nervous helicopters - hide!
3 on that other planet (the plumbing leaks)
4 straight up no apology
5 keening homophony slower than
6 tune in alien airwaves - jazznoir slinky number ends in back alley knife to throat
7 thrashjazz striving to be becoming conscious of self
8 weeks later same session self fully formed looking back

Such sensitive touch! Now I want to try playing this on my clavichord.

While Karen and Neal were rehearsing YMSK I tried out the freshly batteried pickup of the guitar that walked over the other day, in four track glory. This may be my best route to learning to play the thing.
Posted by Keith Eisenbrey at 3:55 PM No comments: 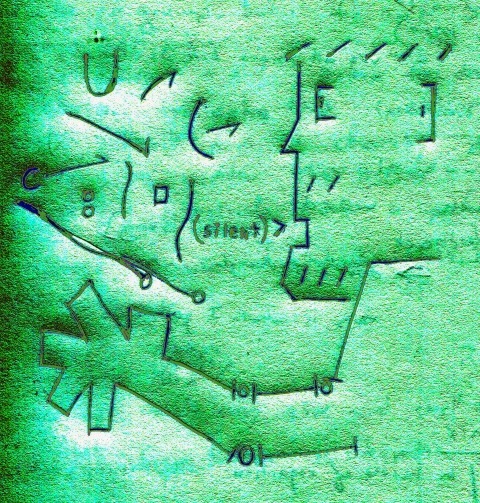 Imagine your quest is to learn our solar system and everything in it one particle at a time. The number of particles, or in this case of combinations of the 88 keys of the piano, is the quantity expressed in base 2 by a sequence of 88 ones. A very large quantity indeed. It is so large, in fact, that this piece, this quest, in its entirety, can't be heard. It is, as an entirety, or even as a significant enough portion to grasp as a portion, completely and essentially inaudible - as absolute a silence as can be imagined.


Recorded
December 17, 2013
Banned Rehearsal 53 - Keith Eisenbrey, Anna K, Neal Meyer - October 1985
We start with some rhythm modules that ease into sudden songs: Under the Stars, and Can't Play th'Trumpet. But by the end, between Neal's blown-out speaker (dubbed 'the speaker of the house') and craziness with the microphones, the session sounds like the machinery of civilization recording itself being chewed to pieces by a planet sized troll.
Banned Rehearsal 781 - Karen Eisenbrey, Keith Eisenbrey, Neal Meyer - October 2010
25 years later, subtle shifts of flora map a forest floor.
December 19, 2013
Keyboard Sonata (Divertimento) in D Hob.XVI:4 - Haydn - Christine Schornsheim
I was put in mind of J.K. Randall's bias against "Perfunctory Propulsion". These phrases don't interleave in graceful subversion of meter (like Bach), or balance in delightful conversation (like Mozart). They whip like pennants in a stiff breeze. Until suddenly they don't and they are fountains frozen solid. Until suddenly they are filigree or crickets or calculus.
Children's Choir Christmas Pageant - Bellevue First United Methodist Church 1965
I was six, so I must have been in one of these choirs.
In Session at the Tintinabulary November 25, 2013
Banned Rehearsal 849 - Karen Eisenbrey, Keith Eisenbrey, Steve Kennedy, Aaron Keyt, Neal Meyer

﻿
Posted by Keith Eisenbrey at 3:42 PM No comments:

This tape ended up being a distillation and summary of several strategies that had been worked out in previous sessions. We started with sudden songs, notably Neal's first cover of Aaron Keyt's This Bus Won't Stop For Me, immediately preceded by the instructions "Enthusiasm, idealism, and a forthright approach". After we did that for a while we found ourselves in channel separation mode, Neal in the left speaker making tiny sounds and me in the right speaker with a guiro. Moving then to spoken word play (" . . .  think  slowly  stop  between  each   word  . . . "), high birdlike feedback intrudes, at first masquerading as whistling then boldly chirping. We take a high banking trajectory into a crazy, off place. Neal ends in self-referential mode, softly repeating "this is what I call a quiet tape" over and over to the cut. It certainly has some lame moments, but is mostly quite listenable.

Performed on what I believe is a small harpsichord: not one of those orchestral multi-manual behemoths, but a private, residential sized instrument.

For many, it just isn't Christmas without The Messiah. O what a difference italics make! The theological thrust of the work is focused on Christ the King, as one would expect when royal hierarchies were the only show in town. At our historical remove this comes across as far more flattering to kings than illuminative of Christ.

In Session at the TintinabularyDecember 9, 2013Your Mother Should Know
Demo for an upcoming album project.
Posted by Keith Eisenbrey at 3:16 PM No comments:

Email ThisBlogThis!Share to TwitterShare to FacebookShare to Pinterest
Labels: Banned Rehearsal, Triptet, Your Mother Should Know

The sectionals, especially those that Neal and I did during this period, were not so much sessions of free-improvisation as they were freely-improvised workings out of ideas of things to do with which to fill up sides of tape. On the plate for this was a continuation of the sudden song project. Texts used include a Heine poem and coin-toss-chosen phonemes from John Rahn's Lines Of And About Music. In the middle Neal launches into a spirited acoustic rendition of Wild Thing, which gesture in subsequent sessions became a reflex go-to subject changer. In this case I can't say that the subject changed from was all that spectacular - we were once again driving lameness firmly into the dirt - but it was never about being spectacular, and working steadfastly at sticking points often leads to amazing places otherwise unreachable. Changing the subject comes across as a defense mechanism for avoiding discomfort, and veering into a groove, specifically, approaches social manipulation. You can join the fun or you can be a grump. But if neither fun nor grump is where you're at you're stuck. There is no room to maneuver into elsewhere. You just have to wait it out.

Haydn is so gracious with the what of where he is, and with the spaces between. He does not move along to satisfy moving, but to provide a vantage of a new what, at a precise remove.

They'd fit in quite well here in Seattle. Surf-rock self-parody. You'd almost think Kurt Bloch was involved. I have to say their cover of I Got You Babe made my jaw drop.

In Session at the TintinabularyDecember 2, 2013Gradus 238 - Neal Meyer

In anticipation of the impending 2-hour public performance of Gradus on December 14th, (Chapel Performance Space, Good Shepherd Center, Seattle, 8pm) Gavin Borchert came over to hear a 1:3 scale model preview. Of the three rungs to be performed, the first two differ sharply in the quantity of pitches present. I was struck, hearing them in such close proximity, by how perversely bereft the more pitch loaded rung was in timbral richness, as though the sharp point of palpable sound was obscured by a haystack of figuration, however attenuated that figuration might be. It made me wonder to what extent we compose in order to hide the actual in favor of the conceptual.
Posted by Keith Eisenbrey at 5:53 PM No comments: 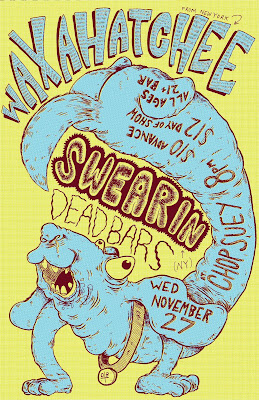 If each band's set were successive acts of a chamber opera the evening's dramatic arc would be distinctly Schumannesque, Florestan to Eusebius, centering focus to a single point, to a single low thwung on guitar, to a single attitude of neck, to a single sung note carrying all.

Or, as root context trajectory: From (Dead Bars) street music doo wop girl group deep ground punk, similar ur-milieu to the Ramones, but from longer back now and un-admixed with keep-your-distance up-yours attitude, all joy and hopping, the sheer noise a naked mask to bare confession behind; through (Swearin') a mid-ground to brake the tempo down, twisting chromatic bass lines (you know, for us music nerds), filling the dragon with fire of ride and crash, as though Velvet Underground were jamming with Red Ribbon; to (Waxahatchee) where it all boils in the end, blues at its most minimal, somewhere far out near Star Anna's constellation, in the nebulae of Whitney Ballen and Jonathan Richman, at the edge of, as we leap.

The spirit of the age is scholarly and impatient of the performance practices of our Romantic forbears. For better or worse, it is no longer the time to blithely play old music on modern instruments in the assumption that, the new instruments being improvements upon the old, all the music played upon them is improved thereby. I'm not a baby-and-bathwater idealist in this regard - I will cling to Milstein playing the Sonatas & Partitas and Richter's WTC and much beside - but there is plenty to be said for the clarifying decrustification possible on replica instruments, and for the imaginative delights unleashed by impromptu embellishment. Ms. Schornsheim plays this early Sonata on a harpsichord, taking every repeat as an opportunity for gloriously transformational ornament.

November 26, 2013
Rapper's Delight: The Best of the Sugarhill Gang