Two sets of songs - Honeymoon and Embers of Discontent - each exploring quintessential tropes of the evolved Seattle male animal: heartfelt sensitivity and leftish leanings respectively. Ian has a listenable, if breathy, voice, and his straight-ahead delivery provided a stable point of reference as the string arrangements periodically veered us into traffic or suddenly tipped the floor into a wall. I left thinking that parts of this were unfinished, which is not a bad place for a collaboration to be.

Thread of violin. Rock and bone.


March 20, 2012
Squeeze Me - Bessie Smith [from Allen Lowe's That Devilin' Tune]
We Got The Same Kinda Power Over Here - Rev D. C. Rice and his Sanctified Congregation [from Dust to Digital's Goodbye, Babylon]

And they got some fancy piano playing too.

Deep in the background check out the organ track. Nice!

An index point for the committed vocal.

Now Be Thankful - Fairport Convention [from Meet On The Ledge: The Classic Years (1967-1975)]
Clocked In - Black Flag [from The First Four Years]

Militantly non-interactive incessancy. A dis-cooperative venture. Part of what has been so fascinating about participating in this project all these years is how often the sessions are far more interesting than they are good.

In considering another time's consideration of another time's story it is important to keep in mind that our own time's consideration of that other time's story is just as suspect. Hence our discomfort with the neo-classical aspects that seem to us most perverse - the happy ending and the Deus ex machina - was made evident in the Teletubbysian fields and the clown on the bicycle. But opera staging, at its very best, is a botch, and this production did have some attractive aspects. We seem more comfortable with the dark aspects of the story, and the production of those moments was effectively stark. Musically I can only listen with jaw agape. It is a truly stunning thing.

As though not directly singing the song, or at least not singing it directly to us.

The antithesis of eighties drum sound, fat and soft, without impact.

The tapes going in each have their own distinct trajectory, and their details are heard in the context of that trajectory, forming it, informing it, being formed by it, and being informed by it. When the two tapes are mooshed together the details don't gain a new contextual trajectory so much as become divorced from it, cast loose, flotsamed and jetsamed.

We share readings of Poe. Aaron begins with the Raven and ends with The Cask of Amontillado.

There is a stillness about it.

Another song by my brother. This one is a strongly built number with a fabulous vocal. I might quibble about the mix (too big guitar), but hey, the playing is pretty nice.

Early in 1985 it occurred to us that when thirty-two 45 minute tapes are lined up they add up to 24 hours of improvisation. A short leap led to the idea of playing them all at once. Not having 32 tape players handy, hampered by the fact that you can't play both sides of a tape at the same time, and possessed of only rudimentary hardware for mixing (two feeder tape decks, one target tape deck, and some 2-to-1 adapter patch cords from Radio Shack) we did the best we could mixing two at a time to create 16 Banned Couples, again to create 8 Banned Mixers, again to create 4 Banned Seminars, again to create 2 Banned Thologies, and finally again to create the Banned Day. As one might expect the actual result was a nearly unlistenable gray fog of glooby aural crud. As I was recently copying tapes to digital I decided to remix this project in hope of balancing levels more carefully and of preserving a bit more detail into the later iterations. Modest success.

In listening it is easy to treat the discourse as distinct from the collage elements, until those elements intrude upon and obscure the sound of the discourse in fashions uncomfortably wrong-sounding, as though they have sneaked in illegitimately, via some obscure software glitch, rather than as an intentional just-so placement. The effect is disconcerting and alarming, never resolving itself into what should seem to be the obvious intent, pushing a button we would rather not have been pushed, dis-jarring us from easy enjoyment, acceptance, digestion. It should be the point, if we could accept it.


My recording (rather than Pete's).

I assembled this album in 2005, collecting all of my Gathered Songs, sung by Karen Eisenbrey, Sarabande for trumpet and piano, performed by Jim Knodle, an improvisation by Jim and me at Gallery 1412, and my 2005 remix of Psalm 23 (meditation, responses) using taped sounds of me at the clavichord and of Neal Meyer reading. There are some technical issues here and there, but I think the album holds up pretty well as an interesting listen. The Psalm 23 setting is so off kilter from the rest that it brought me up short, in a way I really like.

My brother Paul is a fine singer/songwriter/guitarist and amateur luthier. This song is a fully realized studio demo. "I'm driving to Hawaii / I hope the danged bridge ain't out". 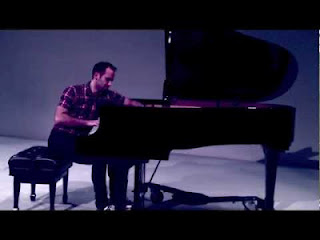 Within the context of keyboard literature this piece provides an intriguing comment on the apparent flatness of the timbral surface. The conceptual impact of the various preparations doesn't so much create the image of a new instrument - it is always clearly a piano piece - as bring into brilliant relief the figurational aspect, the fingery playingness of it, anchoring us firmly within the discursive realm of Couperin, Bach, Beethoven, Chopin, Scriabin, Debussy, and possibly more apropos, Scarlatti. On top of that it is sheerly gorgeous, and Adam knocked it out of the park. You can download a free recording of a recent live performance on his website. I did. Thank you Adam!

A stunner. John tuned the lowest string down to an A and bowed it slowly 28 times, leaving space between each iteration long enough for him to no longer hear it or to feel his instrument producing it. An elegant dynamic design both freed us from the need to con his game and riveted our attention to his engaged care in producing sound. And a ferociously lovely sound it was. Damn!

Interestingly, this piece shares with John Teske's the nearly instant liberation from any need to figure out what is going on, leaving us to enjoy the delight of wondering and discovering which note would and did come next. I was particularly pleased at how different the effect of this was from my own "all the notes but each just once" piano piece N. Apparently Terry had to write a computer program to discover an ordering that would accomplish his intended image of proper randomness - or perhaps more precisely, his particular image of maximal local variety. Fascinating on all sorts of levels.

A series of harmonic stations without progression, twisting around itself.

Selections from Who Are You And How Do You Know? - Jay Hamilton

Our local side-arm pitcher emitting ideas so fast and from so many directions your head will spin. Always a treat. The whole show, God-puppet and all, will be produced at the Chapel on April 7th.

Pete brought over some new microphones and this is his recording.

Delights. A new one every few bars.

There's a piano solo in the middle of this that is well on the way to Cecil Taylor. The other treat is the opening as it emerges and re-emerges and re-re-emerges.

The brilliantly wicked sideways sax entrance is prefigured by the vocalist's entrance right at the beginning. In media res all over again.

A high-school friend was a major FC aficionado. I recently decided it was long past time I gave it a listen and see what was up. At the time I was more of a Pink Floyd-ianado. Who would have thunk that at times, conceptually, the only real difference was a few amplifiers?

Stranger To Himself - Fairport Convention [from Meet On The Ledge: The Classic Years (1967-1975)]
The Puppet - Echo & The Bunnymen [collected from Nancy's Mix]

I'll say it now so I never have to say it again. Echo & The Bunnymen made U2 unnecessary.


Ping pong balls were released.
Posted by Keith Eisenbrey at 6:43 PM No comments: