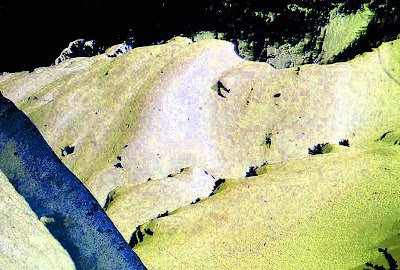 All its roots hang out: old-timey string band (bowed strings), jazz (horns), R&B (keyboards). They engage as though in conversation with their audience, as though in conversation with their clan. The image projected is one of
mutual understanding, i.e., we treat you as one of us therefore you understand what I'm saying from the inside. This allows the audience to project themselves willynilly into the role of understanding conversant, even though they might not have a clue what the band is saying.

Full of sturdy, thickly clustered sounds. It is difficult to squeeze between them to get inside. We find the workspace where the soon-to-be-thickly-clustered sturdy objects are fabricated. In the back we find an acoustic guitar tuned like a swarm of bees, amplified (I think) with headphone-pickup. We step into the yard as the first bulkiest portion of the session comes to an end. We pick up pieces of what might be lying around. This session sits firmly in the era of Let's Improvise a Chamber Symphony.

August 19, 2015
Banned Rehearsal 599 - February 2001 - Pete Comley, Karen Eisenbrey, Keith Eisenbrey, Ann K, Aaron Keyt, IKM, Neal Kosály-Meyer
Five years later we're painting virtual 3-D scenes - spacescapes (note the near-palindrome). Here we have a moorage at  near dawn with a gentlest of breezes and a whale and kelp beds and bellowing sea-lions in each others' faces (manager v. ump). Crabs and darting birds. Now we travel to outer space, tuned in from the control room. Now we find mudpots. Now we drum up weather.

On the porch once again as the summer continues to be distressingly pleasant. Aaron, one final time this year in his local configuration, brought Tony the Treble Trombone over, and Jenny brought cookies (mmmm). Tony bites staccato into the evening echo-sphere.
Posted by Keith Eisenbrey at 2:20 PM No comments:

Working out ways to be exactly between two magnetic poles, or tracing the network between quantum states. Disequilibreous.

Lugubrious long sighs on a murky bed shaken every few semi-moments by a rude corvid scribble.

It gets down to the most disregardable detail of oom-pah, effecting an image of a complex contrapuntal texture by allowing just a few voices to make repeated stuttering do-overs to emerge from the still very clearly delineated actual on-going contrapuntal texture.

Having missed the boat for Sehnsucht we embark for fond regrets and reluctant resolve.

After the head, solos descend until nothing is left but piano and rhythm.

Mostly just a quick tempo nonsense blues riding on a dynamite cult-of-personality delivery, until it ends with a devastating, final, lonely, solo "boom" that vanishes into the hollow room.

If memory serves, one never sees a cigarette touch lips in the film Thank You for Smoking. Likewise, one never hears Ray himself sing or speak the line "Let's go get stoned." His way is to duck and weave.

One could read the musical quotations, from Guillaume Tell and Die Walküre, as a skeleton key to DS's arsenal of symphonic affects and their possible respective political derivations: from public and private revolt.

On the porch again, we begin almost to approach being indistinguishable from the neighborhood of sounds. Neal decided to go home and get some sleep before we started, but Jenny joins us part way through.
Posted by Keith Eisenbrey at 12:06 PM No comments:

structurally: like an inverse memoir, not one remembering many, but many in consideration of one

Just about as sweet as music gets, from Wally's opening lyrical phrase to the nothing-like-it-ever final, quiet, chord.

Many ages ago, when I was in high school, I was given tickets to my first ever opera performance, Götterdämmerung, by the Seattle Opera the year before they did the Ring the first time. Over the next few years, as I digested the experience, what settled was the notion that something odd was happening with the meter. I was watching the conductor and for the life of me I couldn't get the visible downbeat to correspond with anything like a downbeat I had ever heard before. Having become more familiar with the score, and having heard it live many times, I have come to the conclusion that I was right on the money. There really is something funny going on with the meter.

Although I've had this recording of Gurrelieder for decades I don't remember ever really sitting down to listen to it straight through. My gut feeling, with a similar certainty as to my götterdämmerung-epiphany, is that there is something odd going on with its magnitude or scale. Nothing is the size it ought to be, neither in relation to me nor among its parts. Never have I felt so much like Alice after having nibbled an an eat me, nor suspected that the parts have been joining in the feast.

Set utterly without irony, without soft-pedaling the obvious, without attempt to unearth any hidden subtlety, it jumps through the flimsy, sheer innuendo to boldly be about what it was never a question it was about anyway.

Militantly plain. Proceeds like a film of the time, an alternation of scenes and inter-cards. The camera does not move. Its grandeur can only be heard at a conceptual remove.

It was too hot, and I was too exhausted, to do any serious listening, so I sat in on Karen and Neal working up two songs for Karen's fictional band project St. Rage. I pushed the record button a few times and got three demos, one of Distracted Driver, and two of The Drink I Didn't Have Last Night Is the Drink I Shoulda Had.
Posted by Keith Eisenbrey at 4:07 PM No comments: