feedback of the box :: an additional hyperbow with which to pull each string's particulars into relief. Geologic. Ample. Generous as a long prairie drive.

shore side
an anthem

I'm perhaps inordinately pleased with how delicate and transparent a thing this turned out to be.

Cell Block 21 - The Hollow Points [from The Funhouse Comp Thing]

A cinematic chorus from a punk rock musical. Our hero lands in prison. Video unnecessary, it's all there in the music - though perhaps if Busby Berkeley tried it . . .

It makes perfect sense now that I think about it, remembering all those crazy pages of scrawl-doodled commentary {(Igor's goriest, etc.), how like precision scores they are, as in: play this tune exactly so, at an angle to the page, hand drawn, fanciful, from the idiolect} that Ars Antiqua and its "proprietary squiggles" would appeal so deeply.

Curve balls so subtle you'd be past 3rd base before realizing you had struck out.

Collisive. A time-scale shredder. Armor up before listening.

And herein we find that brilliantly square one fingered tune (Pa-Pa Hay-Dn's Dead And Gone) that lurks behind Beethoven's Eroica variation theme.

A telescope extended and collapsed at once, in networked dimensions. And waddayaknow? There in the midst of all that "Es muss sein!" is PPHDDAG inverted, in three quarter profile!

Posted by Keith Eisenbrey at 3:52 PM No comments:

The plot and characters are strong, but it's the pitch work commands attention. Similar in approach to Debussy's Pelleas et Melisande, but with sharper edges.

JRM plays a Lisztian trick with his pianism, in that it sounds like a transcription of music for a much larger ensemble.

Arrangement, orchestration, song-writing, and composition, are all identical activities. The only difference is social attitude.

I kept getting the feeling that the band was manipulating (lip-ipulating?) the sound of their instruments to imitate the sound of older recordings.

'On the beat' in the sense of there being a sheer dance floor between his sound and the beat he's on. Crazy break-dance too, and not even a shred of effort is heard.

Imagine a troop of jugglers performing multiple game-based jugglings simultaneously, each juggler juggling not just what whirls in the air but their specific interior gang of characters, one for each game.

Beginnings are beginnings. Endings are where what it is happens to get lopped off.

The Mountains High - Dick and DeeDee

The development of electronic amplification allowed live sound to begin to duplicate what was only possible in the studio before - and for live sound and studio sound to imitate each other, inventing themselves along the way. Pretty fancy singing back there too.

The piano writing reminds me of Art Tatum, in its melodic superabundance, and of Thelonius Monk, in its unblinking clarity. Melodic variations at heart, but standing in for a single melody is a thicket of tunes, and of sets of nuanced weights and subtle angles.

A political knife attack from the past. Damn she's good!

I believe I recorded this off the radio some many years back. Its 'concerto-ness', that is, the sense of its contrasting sounds, is not a contrast of opposition, or of vying equals. Rather, the quartet provides a new sound region within the orchestral sound, now hidden, now revealed - and further in each quartet member reveals individual smaller regions within the quartet sound region within the whole sound. It's also got some lip smacking pizzicato passages.

Reed and no reed. That old familiar Crumar sound slowly molding the bend. There is a sense of proximity play. Each sound source exists in specific relation to the listening mic. Hide and go seek. Each proximal node carefully nurtured for coexistence. Didjeridu makes the Seattle Stu connection, I presume. If one had a choice in all the world's musical history for who would be the best person to be in charge of your pitch-bend wheel, it would have to be Jim. Were pitches ever bent to so vivid a drapery of sound?

Attributions jumbled and uncertain. Who says what when? The instrumental rhythm, oh so impeccable, appears to be solvable, but then one wonders.

Recorded hot, small instruments scraped banged and rummaged through. Clearly not great music, but just as clearly intently engaged, and in the clear intent of being only and purely intently engaged.  || the Jaymar before it fell apart!! Ah how we miss thee!! || Getting to a place where, in music, if it were speaking it was doing, would be speaking in tongues.

Steve constructs a tiny set of drums on top of the xylophone. Karen revisits the bug guitar. Keith roams about what catches his eye. Aaron provides treble trombone talking points. Neal cuts it up in pieces.
Posted by Keith Eisenbrey at 3:38 PM No comments: 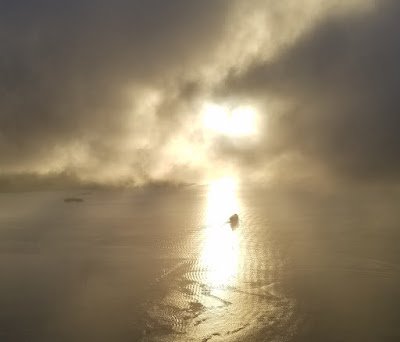 This concert was, to the best of my recollection, my first experience with a live saxophone quartet, and I found myself comparing the sonorous qualities of the ensemble with other instrument-choir groupings. It compares favorably with string quartet in many aspects, perhaps falling short in the subtleties that arise among the specific colors of each string. But the dynamic range is wide and supple, and the articulation palette is rich. The sound has focus and authority, each instrument clear in its timbre even while blending into an unmistakably choral unity.

They were obviously having a blast negotiating the quick, complex arrangements, to the point where my perverse imagination wondered whether a really slow tempo would be socially successful. I know slow notes are hard on wind players - especially in the upper registers. Would it simply not be fun enough to bother? 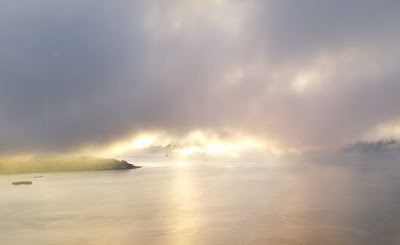 Honey Noble, a singer-songwriter project of Katie Jacobson, performing with a large crew of electrified musicians, dancers, actors, lighting, and projected video, presented The Monster, a play / song cycle / dance / light show that struck me as eminently worthy and crazily promising, but unfinished. What I was digging the most were the multiplicity of axes along which it extended itself, the relationships among the planes of its exhibiting. Onto the Big White Wall in the back a frenetic video was sometimes projected, a dancer in a beige body suit stood nose right up close to the said BWW. The various electrified musicians (I recognized Greg Sinibaldi with his electric wind instrument) draped in ugly hospital gowns, sat circled around the back of the stage. The short bits of acting took place stage front, as did most of the singing. The dancer and two supernumeraries (minions? acolytes?) invaded the audience space down the center aisle and around the back to either side. All in all an attractively active setup. Katie sang mostly from front and center, which, considering the dramatic themes (self-obsession, self-possession, self-destruction, self-integration) worked just fine.

What struck me as perhaps unfinished were the joints between things, which could, to my mind, go either way - toward accepting them as such, stepping out of character, setting each up like a new tableau, "thanks for your patience guys while we reset the stage how you doing tonight"; or finessing them so that each seam lives in its own gut wrench, choreographed, composed, inevitable.

In the land of sentient sequences, the fulcrum of movement and stability remains contingent on self-generating hair-triggers.

The newest G-natural. A tool of pulling, a tool of hammering on the side of itself to loose the recalcitrant rod of itself plunged deep into the heart of itself.

Posted by Keith Eisenbrey at 2:26 PM No comments:

The event as a whole wholly subsumed its constituent parts. Not that each part was not utterly distinct in its own integral event-ness, but that each part gave itself up wholly, in all of each of its integral event-nesses, to the passage of the event as a whole. That is, each event's moments were lifted into a status within the whole event that outshone their narrower moment-hoods. This doesn't just happen. Serious lifting was involved.

One hell of a band too.

Sheila Bristow :: two songs: Strong Wisdom and Leap Into Love, for mezzo-soprano, piano, and cello. Melissa Plagemann sang, Sheila played piano, and Meg Brennand was her usual magnificence on the cello. Sheila has been working on this set for some time now and we have heard earlier versions of at least one of them at other Salons. I admire her straight-ahead, get out of the way of the text, illustrate clearly without over dramatizing things approach to song writing. Although her style is nothing like my own, the attitude is like, and refreshing. The entire cycle will be presented at the Chapel on April 8.

Steve Eric Scribner :: Tree and Stone (Artificial Version), for paper tree parts and chair stones (performed by the audience); and The Sherványa Nocturnal Music, for piano, harp, and other plucked instruments (peformed by Steve, piano; a harp player whose name I was too dead tired to remember to write down; and Karen and me on miniature kora (bug-guitar) and three-string ukulele). I was involved - in the sense that I plucked a few notes quietly through most of it - so my only comment is that I think I had the best seat in the house. The paper sound from the audience was luscious.

ComManD :: Thaumaturgy, for percussion, saxophone, dance, and electronics. Being, as I say, pretty much dead tired from a wicked week at work, I didn't manage to catch all the names, but Ivan Arteaga operated, to some extent, as spokesperson. They are working on some fancy computer-enabled ideas of collaboration, interaction, and mutual sound manipulation. The image that struck me strongest was the dancer, tricked out with accelerometers at wrist and ankle, somehow being both marionette and string-puller at once. Weirdly fascinating.

This stands in front of you several times over all at once. Resistance is not futile, it is presumed, vanquished. Nothing like music as usual.

February 27, 2017
Assembly Rechoired 56 170227 - Karen Eisenbrey, Keith Eisenbrey
There was rain. There was snow. There was thundersnow. And then came the overturned propane tanker on I-5. Traffic was beyond a mess. In honor of our compatriots trapped in traffic Karen and I carried on with noise. Since before our marriage (the first two were in June of 1986) we have called any improvisation session with just the two of us and no other Banned Rehearsal regular an "Assembly Rechoired". This is #56. Karen played the Excelsior and I bumped around several noisy items, at the end pouring all the ping pong balls out of the bucket into the chimney. And back.
Posted by Keith Eisenbrey at 4:23 PM No comments: