﻿ Washes and sloshes. We were riffing last night on the possibility that crows are not particles but waves, and that the crows we see are merely the results of creative interference patterns in otherwise invisible crow-waves. Likewise the calls of crows could be the audible residue of a separate set of such interference patterns among crow-call-waves. What fauna might arise from the joining of tamtam, ocean drum, spring drum, tingly bell, and autoharp strum?

If music is a mode of social intercourse then in thinking of any particular music episode we can consider the dynamics of that intercourse as perceived from various pertinent points of view, or as to how that intercourse resolves in terms of those points of view. One dynamic is the creative postulation of an other (or set of others) by each participant, which postulation is only partly dependent on the imposed role of that participant within the normative social paradigm of the situation, as we might choose to view it. We can, for instance, postulate a being, an other, out of the particulars of the sound, which other might be wholly separate from, or partly or wholly integrated with, the identity of the other who is a fellow participant.
Posted by Keith Eisenbrey at 8:34 AM No comments:

On stage, front, as a prelude, a vertically maximized microphone stand bearing two globuloid microphones in vertically opposed attitude, twisted from each other. A recording device lounges on the lone chair. The performers dis-assemble off-stage, three on the left and four on the right, along the windows. On the left from the back: cello, oboe, double-bass. On the right from the front: bass clarinet, drums, violin, bassoon.

PK: Given the distance between them, to join is a choice not a given. Joining is often chosen. JT: Circling so that motionless twists back into. PK: Melodic in a lyric space, without the usual rhetorics of dramatic or conversational continuities. JT: Slow, then quivery. AG: Nervous underpinnings. KO: Chorale with drummy bit. 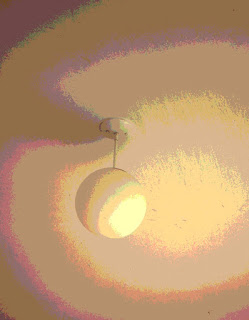 Rattle of a can packed tight and dried.

A large room fit into a small room.

Neal took John at his word that as much or as little as is desired of the score can be used in any given performance. Neal used just one piece of material, item AJ from pages 26 and 27. Eleven minutes of spare sound framed by 10 minutes of silence at one end and 9 minutes of silence at the other. The evening was extraordinarily beautiful with sounds of children playing wafting in.

Welcome to my planet. I come in peace. - Keith Eisenbrey

welcome to my planet


i come in peace
May 5, 2013
﻿
Jim Page, Freddie and the Screamers
Restaurante Michoacan, Seattle

﻿﻿
We arrived just as Jim was finishing up his first set, but we got to hear him again later. It is always a pleasure to hear such fine guitar playing.

In a Crown Hill parking lot fronting on 15th Avenue Northwest Freddie and the Screamers played two sets full of classic rock and roll for a distinctly classic-aged crowd. Over the course of the evening a few people would get up to dance. At about quarter to 8 the police pulled up as there had been a noise complaint from several blocks away. Personally I thought they just managed to balance the traffic noise of 15th. They sang one quiet number and then lit gleefully into The Sonics' Cinderalla. At that even I had to dance, and that shut the show down mid song. Can't have a bunch of gray-hairs dancing in a parking lot, you never know what might happen next.

The Concord Sonata has become something of a rite of passage for American pianists staking a claim in the modern repertoire, and it is certainly impressive to hear it so valiantly and brilliantly performed. But Ives' harmonic language is distinctly viscous, and is helped neither by the enervating deadness of Brechemin's acoustics nor by his more-is-better writing for piano. The thinner and more transparent it gets the more I like it. The last few pages are magical. One wonders what this would have been like had he had a pianistic imagination on a par with Scriabin or Sorabji.

But it aspires to be more than just another big concert piece. William Sharp's dramatic readings from and concerning the sonata's attendant essays highlighted the work's extra-musical intellectual underpinnings. At this remove of time I could almost accept these as an artifact of a distant past, a nostalgia trip to a more innocent America, were it not for the fact that peeking out from behind Emerson's transcendentalisms I can't help but see not just self-centered New Age-y claptrap, but also the distant sound of goose-steps and the stink of gas. 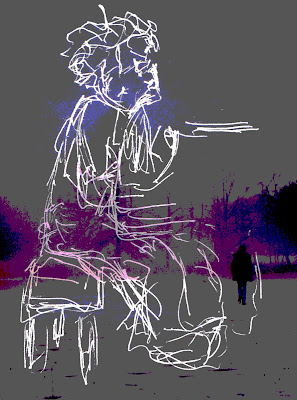 Saturday May 4, 2013 at 8:00 PM
Keith Eisenbrey and Neal Meyer at The Chapel Performance Space, Good Shepherd Center, Seattle
Music for solo piano:
Eisenbrey - Welcome to my planet. I come in peace.
Cage - Solo for Piano

Long-time collaborators Neal Meyer and Keith Eisenbrey share a piano concert of epic stillness. Neal Meyer continues his exploratory celebration of the silence of John Cage with a performance of the seminal graphic-score Solo for Piano from Concert for Piano and Orchestra (1958). Keith Eisenbrey presents his recent contemplative pitch stereoscope: Welcome to my planet. I come in peace. Two frameworks, joined at the source, phased (in specious increments), cogs and gears, mutually warped and warping, rounding space.

Truly the most beautiful string quartet ever performed on a half size cello. The composer engages in hard-core old-school microtonal thinking, which is certainly thing to know going in or you'll find yourself struggling to regain your bearings. But the most remarkable thing about Phillip is how absolutely he inhabits his own music, to the point where, as big as his personality is, he isn't entirely present until he plays. Stunning.

Thank you Glynn and Karen for the wonderful performance. I look forward to doing this again soon. When I got home I was thinking about the questions that were asked and realized that I had neatly avoided one with a technical response. Why was it such a particular challenge to set this text? Quite simply, I find it hugely intimidating to set the words of Jesus. It is imperative to get out of the way of the text. Getting it wrong is not an option.

A pretty little piece compiled in C-Sound, full of old-fashioned blip-bloop electro-sounds that made me smile. It ended with a  ravishing quiver of evanescent resonance hanging precisely 17 feet above the stage. I made a comment in the Q&A about a concern I had with the wide stereo separation. After thinking about it over night I offer this clarification: The aesthetic image of right and left would continue to be there even if the speakers were closer together. The farther apart they are the more the fact of right and left overshadows that aesthetic image. Image always trumps fact, so to strengthen fact at the expense of image is to weaken, or at least partially obstruct, the experience. I've been called on this myself in respect of extreme dynamics.

The title is a riff on 'Canonic Variations'. It started as a piece for viola and piano. I orchestrated it for a reading session with the Seattle Creative Orchestra some years ago and this was the midi version that came out of that. The original idea came from a possible mis-hearing of a theme and variations movement in one of Prokofiev's piano concertos. What I thought I heard was the music of an earlier variation returning in the middle of a later variation. So I made five variations of 50 measures each. In measures 31-40 of each variation the figuration of the next subsequent variation was used. In other words, variation 3 figuration is inserted into variation 1, variation 4 figuration into variation 2, etc., and around the horn, so to speak, so that 1 shows up in 4 and 2 in 5.

Yikes! That was an ambitious program. What was I thinking? The Boretz, Barkin, and Verrall are all fiendishly difficult, and Hockets, though not technically challenging for the most part, requires strenuous concentration to stay on task. Oof!

1. Continuous throbbing pulsing thrum. 2. Picking up back again in mid stream becoming a working out of doors with alien overlords full of non sequitous entrances. 3. On a malfunctioning radio at a distance of distance picking up malfunctioning signals in a rhythm like typing. 4. Through hard crystal edges electric arcs zapping obsidian 5. The toxic pool is in the basement but it is aware, and falls off quantumly. 6. Choral, tropical, wet. 7. Mica slivers signal. 8. Resynthesizing the sound of speech synthesis.