After a lovely dinner at Restaurant Zoë, Karen and I wandered over to Narwhal, an over-over-decorated venue in the downbelow of the Unicorn.

Cumulus has recently picked up two members of Dead Bars, John Maiello (singer for Dead Bars, drummer here) and C.J. Frederick (drummer (mostly) for Dead Bars, guitar here). The sound of the band is solid and muscular, which contrasts nicely with singer Alexandra Niedzialkowski's interesting soprano timbre. Something of a Betty Boop twang made me think of another local she-minstrel, Whitney Ballen, though Alex's voice is pitched down a step or so.

Chris Brokaw centered his sound on the lowest three strings of his guitar. He sang, among other things, a nicely understated version of Stagger Lee. A quick poke on-line reveals a guy who's been around for a while doing some interesting things, only some of which is remotely like pop music.

Dræmhouse filled in all the high partials that were underutilized in Chris's set and jacked them through effects pedals into quite the roiling mass of sound. It was great to see Emma Danner of Red Ribbon holding down the bass end. All that and the stage was lit up with Christmas lights draped with table cloths.

Performed at a comparatively slow tempo, for clarity's sake. This works especially well in the 2nd movement, where the particularities of the figuration are evident even at the end where the upper part slips an eighth off the beat.

Pleasantries in which the ornamentation reveals occasional deflections, or sudden, brief windows into other, darker spaces.

Very nearly, for a moment, the prelude to Tristan.

The kettledrum at the opening is actually terrifying.

Great and terrible things happen in pitchwork at pianissimo.

Soft landings, head to pillow. All sonority filled in always.

An attempt to dance with grace and charm in Jupiter's gravity. A forced march dragging the baggage of history. Uprooted isolation, motives slide in like knives, insinuating themselves, prying apart the layers. The grand spectacle of all there is: now in 70mm contrapuntal widescreen! There is a certain Walter Mitty play going on here. The hero looks around him and sees domestic charm. He looks in-round him and reflects the cosmos.

Paralax in a hall of mirrors.

Tone-paintings brave enough to flirt with mimicry - foghorns, passing cars, bird calls - but not so much composed as pre-arranged - discussed beforehand. Another way to think of it is that they are doing what western concert music could do, but with an ensemble that has a different, more all-hands-on-deck attitude about how things fit. As an album it is arranged prosaically (fast, slow, fast . . .), a strategy that works pretty well. Anything less plain would distract unnecessarily from the individuality of each cut, would seem to suggest that each was a part of a larger composition, rather than a thing on its own.

This benefits greatly from being incomprehensible.

Harp and four (I think) voices. Tunes that slip around to find their locking place.

[historical notes: At the time we were attempting to name our sessions. This one is All The Bells and Whistles or Aaron's Sax Solo. In 2002 I listened and wrote: "quite the full-blown racket, when the chimney gets in the act w/ all those bells & the guitar. whew! → last bit of this is FINE - big & loud."

All motion is glacial. Only the weight of it forces flow. Activity brings stasis, perpetually poised to begin. and fragmented.

written with a microscope

constraints aren't upon what but upon how


This last Sunday's dubbed trio was for plow wheel, cymbal (unmounted (bottom half of a high hat, I think)), and steel string acoustic guitar (hand made by my brother Paul).

(047) trichord positioned as source (from which we disintegrate) (or which is clotted up only occasionally, if ever, to re-emerge).
Posted by Keith Eisenbrey at 3:28 PM No comments:

enteringing to fill the front space with ringy hang (within which) to (or upon which) to elaborate (or from within which) to descend (like mist) or breeze or (with which) to (begin to) incise. {sound and its digital double} || colonization complete. look up the double. gallumpher gallumphing. squeek playset swings sloshing after loud big (settling) but sloshing calms leaving as entered - ringing but having brought forth and taken from: a melodious prize, a true tune.

Keith Eisenbrey
Another - for solo piano


(Sphinxes can appear most anywhere)
(Scarabs love to scuttle among the sphinxes)
(Pools stay put)
(Potions can be mixed together, bit to bit or batch to batch)
(All options remain open)
(Smoke is where it ends)
(As an alternative, try not filling the clavichord with ping-pong balls.)

Nadya continues in her heroic quest to get it all down, all of it, beginning to end, top to bottom, as a lyric chamber work - modelling a mythology in melody.

Steve and I made a bunch of noise to some of his pre-recorded sounds. Having been on stage (having a grand time) I don't have much to say about how it came across out in the hall.

A work for piano trio full of faith in clear linear progression. Marvelous perturbations as the lines gently veer far and close. 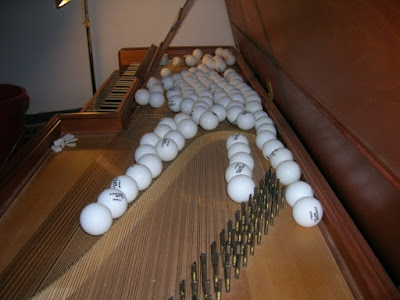 a poem that is an army passing

The soundtrack to some music. It has the uncomfortable feel of a staged scene of happy peasants engaged in pleasant peasanty behavior.

As a pairing it's a bit of a bust. The Alleluia is a canon, so there are two contrapuntally derived forms in a row. This might work if the fugue were as colorful as the canon, but it isn't. The last bit of the Alleluia is especially nice, when the mix of vertically presented intervals shifts just a bit. It's a subtle technical change that has a profound impact on the sound.

Trapped by it's own orchestrational conceit, many an opportunity is missed.

watched at all times (a pleasant face must be shown)

In which we meshmeld with the trafficsound.
Posted by Keith Eisenbrey at 3:37 PM No comments:

Golly it was hot in there! The sound system's woofer, pumping air around, actually helped. One could feel a slight cooling movement of breeze when the bands played. Being old we decided to head home before the last two acts came on: Regional Faction and Mustard Plug. I'm sorry I missed them but not sorry I got to bed before 11.

When we arrived The Botherations were already playing, but I think we only missed a little bit. They would have fit right in on "Nancy's Mix", a mix tape of early '80s mostly punkish rock (XTC, Echo and the Bunnymen, The Jam, Gang of Four, et al) that was given to my Bostonian friend Nancy Chase by a friend of hers and which I dubbed and brought back to Seattle. A few years ago I reconstructed the whole thing on I-tunes. I still have a soft spot in my heart for those sounds.

Dead Bars started a few years ago as a one-gig (fill up a slot) pick-up band comprised mostly of EMP employees and ilk. Something clicked and they have been touring and recording and performing as much (I think) as they can while it lasts. The personnel has shifted around, and partly come back around. The drummer at their first show bowed out early since he was already in too many projects, but has now returned playing bass. This was the first time we got to hear them sing their cover of Neal Kosály-Meyer's song Tear Shaped Bruise, and we even got a shout out. Thanks John! Always a pleasure. Next time I hope they get to play a longer set.

I learned later that this was ostensibly a ska show of which we only caught the first act. Ska is a sub-genre I am not familiar with, but I gather from The Kings that it involves a pack of horns, quick staccato off-beats (which reminded me of very fast James Brown), and lots of stage strutting. Also a wolf mask. I learned that girls and boys are not allowed to dance with each other as couples, but must dance in separate groups. Boys on the left, girls on the right.

Moving up down and stuck in vertiginous spaces, vast interiors (much of which fails to punch through the warm mass accumulating the midrange of this recording, though cranking the volume helps). One could read this as a socialist tract (or as something more insidious): nation-building through strenuous cooperation. The fourth movement posits the hope: the nation aspires to become a cathedral of souls.

A Chopin pastiche for sure (and dead on as such), but also more than that, like an exploded view of a Chopin waltz just before being reassembled in surreal animation.

Comes on like a circus barker, as though it knows it can't deliver.

The whole is elusive. We observe attractively painted parts, in close focus, moving against each other. We surmise, connecting and moving the parts, marionette strings. The inaudible string puller is the uncanny ghost coming up behind us.

Ecstasy
as location || as journey

The first movement is the glorious mountain about which the landscape of the second is spread, and of which glimpses can be seen, calling.

Shielded. Locked in. (key turned from the inside).

The drumming anchors a sophisticated piano piece to a ground of dance. What might be only subtly tracked without the drum becomes plain with it. In that sense the drumming is an abstraction of, a theory about, the piano piece.

Looking for that quiet intimate moment or grimly dancing as these people fight, sniping with astounding articulation.

When I was an undergraduate at the University of Washington in the late '70s I was fortunate to have accompanied several of Professor Zsigmondy's students. As I recall there was a large poster of Bartok on the wall in full view of the piano bench. This was a great and treasured experience, but the picture was not comforting.

Improvising on Big Red Bag of Fun; Bells & Gongs; Tenor Banjo. When I left home for Annandale-on-Hudson at in June of 1982 I brought with me as luggage a small leather portfolio and a big red nylon suitcase. Since my return this unwieldy red bag has served as a place to store small noisies: lids to pots and pans; pots and pans; cookie, coffee, and tea tins - often repurposed as rattles; that sort of thing. Over the years it has become quite full. Early in Banned Rehearsal lore it was dubbed the Big Red Bag of Fun. The various bells and gongs have accumulated without much effort on my part, their individual provenance lost many years ago. The banjo arrived in the early '90s when a co-worker's girlfriend needed to trade her banjo for cash to pay taxes. $100 later it still lives here, waiting for her to come back and claim it.

A moment could be a node in an emerging structure (a beam in a bridge trestle) || one must regard each moment as qualified by its place in what will not be known until the end.


I took advantage of the relative cool of the morning to record this week's trio a day early. The instrumentation is xylophone, bodhrán, and german concert zither. The xylophone was purchased from a co-worker who was tired of storing it in his attic. The bodhrán is a recent acquisition from a co-chorister. The german concert zither came from the estate of a much-missed member of our church who passed away some years back.
Posted by Keith Eisenbrey at 2:08 PM No comments: