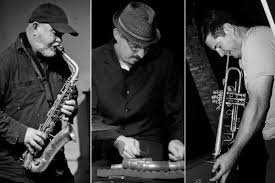 Triangular and biangular alliances, overt and surreptitious. Once the flywheel wheels the flywheel controls. the spinning doohickey looks like something to grace the head of a blue meanie as it begins to blossom. Each of them is a fully formed chamber ensemble in his own sound, together they are a dense trio of ensembles. I was exhausted and almost didn't get there, but I'm awful glad we pulled it together.

Wally and I go back a long way, having first met in the early '80s at Bard College. He was a visiting performer, and I was a grad student. Here is an old old tape, with Karen, Wally, and me, joined by Karen's dad Bill Meyer, who dropped by and picked up a bugle.

Nothing exists but what is allowed, the transcendent other has evaporated into the never was.

My second foray into a hymnody project. No mystery how it is done: I record myself singing the song 8 times, allowing wild variations and harmony. Mix and play with the reverb to suit. Post.

What can be revealed by narrow predictability? What is obscured by a more brightly lit variety?