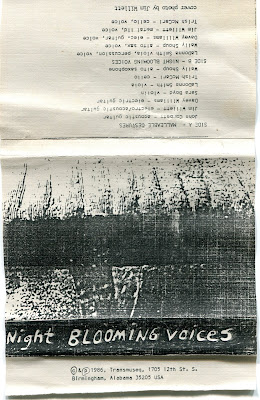 "A note as a sound has suchness. But the note all-alone has no self. Only when it is in the world (as such) of music, it disappears as it participates into "higher" musical units, such as musical phrases. When is a note a sound? When it is an utterance?" - Robert Morris [from "the detail of the pattern is movement", Open Space 19-20 - fall 2015/spring 2016]

As I came of age in music, during the '70s and '80s, the DIY medium of choice was the cassette tape. I understand they are even making something of a hip niche-market come-back. Imagine that!

Someone seems to be playing a massive musical saw, capable of deep swooping sounds whose vibrations are so slow one could nearly count them. Everybody else is squeaking balloons, or one massive room-sized balloon. Later they agree to a sound proposal, pulling toward it all together in order then to twist off from each other in multi-bodied fountain arcs. This would kill as the soundtrack to a slow-motion film of people smooching, steering just between horrifying and hilarious. It weaves and finds, weightless. Spoon stirs in a glass, or a marble rolled around? At just the right moment - Stand back! She's gonna BLOW! Banshriek's holiday, roll the coaster. (I would love to see this acted out). Second soundtrack idea: an addled single-tracking-shot through the brains and thoughts of coffee shop denizens. Fluid seeping into subgenres of Gesamtkunstwerk. 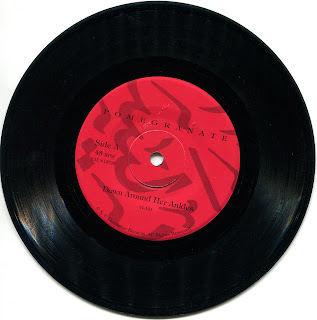 A compositional discipline for the performer. Pitch, dynamics, color aplenty, but only as placeholders to fill durations. Big dots or long bars in an empty field. The score is to be followed, like instructions, rather than responded to, as a stimulus. The unit of measure is the bow draw. The silences are pushed forward, but they end up uniform, the negative of sounds for which there is no particular reason to be. Or, It attempts to put sounds into a piece of music that are not the sorts of sounds that could be in a piece of music, for in order to be those sorts of sounds they would need reasons, intentions, activators and activations, all of which have been proscribed. The whole is an aural episode without signal of beginning middle or end, every location is the same location. What sort of virtual space is that? The formless and void?

As is that which follows, this is another of the rescued records. A practiced clean drum beat, over which the guitar and vocal pull away separately. What I suppose is the bridge relaxes the intensity a bit, functioning a little like a tonal move to the subdominant. The vocal rhythmic play is held to the drum beat by a tight elastic grip, like an industrial strength rubber band, or strong magnetic force.

Love Me Till The Sun Shines - Fantasy Four 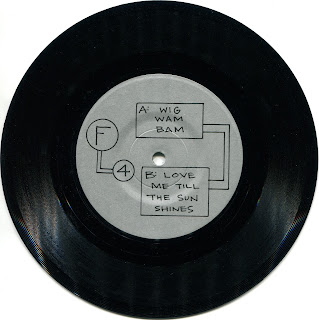 For as much production value as persists or is insisted upon here, it never makes this a polished song, and certainly not a strong poem, instead it places the song's vulnerability into a pronouncedly glaring light.

Recorded media are notations, intentionally or not. A signal is a notation, however the signal arrives or from whence it derives. As it is derived here, it is an artifact of revelation, the sound of a found signal (re)transcribed mechanically. From hidden to uncovered, like bugs under a rock. I'm not sure how much Christopher edited the material, but I hope the answer is "very little" or "none at all".

Patrick offered 3 short piano bagatelles. Studies in multiples of musics, circling warily, or playfully, keeping each other's eyes on the other's eyes. I like these even better upon re-audition.

April 28, 2016
The Drink I Didn't Have Last Night Is The Drink I Shoulda Had - Your Mother Should Know (as St. Rage) - Karen Eisenbrey, Neal Kosály-Meyer