Nice triplets in there. I love the dipthong on "law", curling back on itself as though hitting resistance. Almost appropriate: Karen and I recently watched "I Was a Fugitive from a Chain Gang", which has some truly amazing sound events in it, as well as a fascinating view of the connection between the penal system and slavery.

John, I'm Only Dancing - David Bowie [from Changes One]

Technically perfect song-writing. The voice pushes at the instrumentals, as though it were trapped in their cage.

You Better You Bet - The Who [from Face Dances]

Postural pullback, only to return to full frontal, hiding the low point of tenderness from prying eyes. Or letting it hang.

here come the clowns sardonic
self regarding self

Triumphal weariness, as settling to the ocean floor's deepest trench, through its subtle gradations of dark.

Second go at it. A sense of enforced singularity of event, severing any particular participant's interest or curiosity. Salutary to the extent we find a way to do what we always do but spread over thinner space. Or: an exercise in leaving space so that we can't always fall into the always-going-on-ness, leaving space for sharper corners?

Intervals Between Events: A Study.
Intersections of sets of distances between events as motivic cells. Clearly, so as to index the sets.

Easily lovely. the bass is subtly amped, close the fingerboard.

Spoken with attitude. 'scuse, with AttiTude. The music allowed to attempt to overpower, the vocal imitating the lingo of partisan journalism. Drunken sbrawling squalities. Text just one ring of a circus co-occupied by dueling Captain Beefheart Impersonators, infiltrated by multiple iterations of the Chaotic Noise Marching Corps. Babble of neverending political speech. Each music change: to enter a new room.

How they do crowd upon each other! At the end (and this is frequent in these fugues) there is the sense of "OK, now we're ready to really dive in, now that the preliminaries are over."

The purpose of ornamentation is to skew counting, to turn tables on the concept of number. These little pieces are about meter in a way that little else is again until Chopin's Mazurkas.

It is not simply that he moves in the unexpected way (surprise!) but that he gauges each unexpectedness so carefully, veering just so far along the circle of fifths, just so much further at the structural hingepoints: Where we have gotten to determines the depth and yaw of the veer. The slow movement has a focus that allows a huge dynamic range (a model for Schubert's late sonatas?) Then an extra fancy last movement.

Last Fall our choir director, Chris Vincent, was in Italy and kindly allowed me to take the choir for a few weeks. He even let me conduct this justly famed anthem from late in Mozart's short life, for which I remain ever so thankful. What a pleasure! Listening one becomes so rapt that it is not until it winds down into the cadential trill that one realizes what a ride one has been on. A bit like life that way.

An earnest attempt to clearly play what is clearly there. He makes some interesting connections among the tempi in the fugal bits. 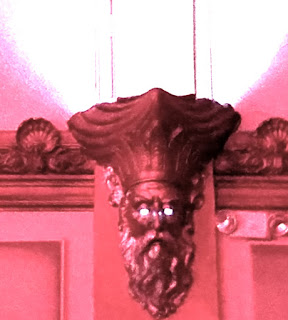 Aaron is back from the far north for a few weeks. Hurrah!
Posted by Keith Eisenbrey at 3:18 PM