Mike was in Seattle for a welcome visit, and I was delighted to receive an invitation to join in this re-union show. I met Mike back in the days of The Tentacle, a local new music newspaper he helped found that had a glorious few years back in the last decade. I had joined him and Deb in a couple of free-improv events back then, one at the Odd-Fellows Hall, and one at Gallery 1412 at which Jim had also participated. Jesse, (back in town!) I have known for a while, but had never had the pleasure of playing together with him until last night. Eric was known to me only through sound (as Mike's cohort in Dubious Duo), but both Tari and Carl were newly met with. Moonshadow and Vivaldi are Mike and Deb's service dogs, and they joined us both as singers and leash shakers. ("the rest of you just rattle your jewelry.")

Equipped with a handwritten set list and a few quick words of instruction, we gathered in sub-committees of three or four to hash out introductions, swap yarns, and to enjoy the necessary preliminaries and hobnobberations, upon which being accomplished we gathered in plenary session to bring the powers that be to naught. A highlight was Aria 45, based on a sequence of words spewed by Old Orange Hair in Montana sometime last year. I have no organ. Indeed.

Demons duly purged. Ya coulda been there.

The Field of Arbol I Winds of the Sun - S. Eric Scribner - Dale Speicher, percussion [from Storm Sound Cycle, May 2011]

question of: which interests in music might be intrigued by such a sprawling text: ambientists? (why?) || if true, might it be?

the text is focused on the present moment, no glaring trajectory of drama
long looping jammers
each statement made by a different voice
(statement quantity equals voice quantity)
in each case no matter where one enters nor where one leaves
carrying my dragon man

We hear this language go by as though we did not understand a word of it, but as though the fabric of the thought containing our least understanding of where it is at is in familiar-like words

collector of plain language parts transcribed through a filter (Prog!!)
a steady stream of Irishness inscribed upon battlefelled parchmeant

middlest of three
riddle me this

a quartet for G, D, A, and E strings, played solo for keeps, all humming the same box
finishes with not ending, after not ending

Ben was kind enough to share this hot-off-the-press recording of this hot-off-the-press solo violin piece. When he shared a midi version recently I surmised to myself that hearing the parts played on real strings, with a real bow, resonating a single soundbox, and performed by a human person, would lift the image from fascinating to lively. I had no idea.

The Sonics are a fabulous band, but the prevailing public ethos of the era (mid 60's) is more than worth unpacking in order to examine our own selves and ethos. 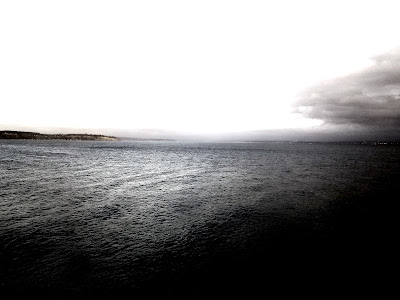 I admire TM's articulative manner, in that it allows what could be an overbearing piano part to float among his fellows. It respects. 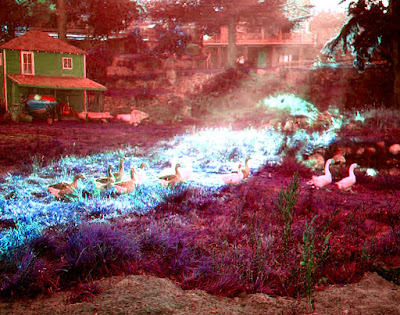 This was the first of six sessions we made on June 7, 1986. We were intent on getting to 100 before Neal left for San Diego later that month. Doug and Wally had come over and we set off from the Greenwood Half House toward and partly around Green Lake. Any theory of what we think we are or were doing or might or could be about is quickly outrun by the practice of doing whatever it is we were doing or just did do. The conversation of ducks is passed by but lingered at. Toy piano plucks and bird calls.

duckkind, the tugboat nature of

My recording failed due to user error, but I made a picture. 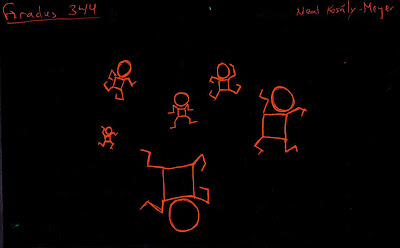 Posted by Keith Eisenbrey at 1:00 PM