Each verse is arranged to do exactly the same thing in a slightly differently arranged way. He could do this all day. To anything.

A song all scrubbed up and shiny for public consumption, just rightly arranged. Syllables are not set to notes, but to pitch vectors, pitch curves.

Behind Blue Eyes - The Who [from Who's Next]

The Romantic imagination mythologizes itself in order to imagine growing up. No Drums! (til later). The songwriting is blatant in the songwriting.

A careful slicing into a funky rhythm hoping to find whom? James Brown? His solo vocal is a collection of overlays, each complete, each integral to itself and complete. Together they form a composite reading of how the song might be sung. Bowie thinking.

You'll Never Be a Man - Elvis Costello [from Trust]

A simpler version of the same (Bowie) idea. Simpler not in the bad stupid sense, but in the clarified pointy sense. Or, how a single song can render Billy Joel entirely unnecessary. 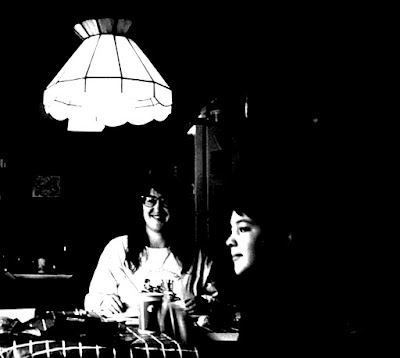 starts out somewhere in Late Beethoven Slow Movement Serious Mode, until it gets just out of sight around the corner. An internal psychic anatomy. Back to LBSMSM, i.e. sustained harmony with inner energy that feels as though at any moment it is about to become . . . [never complete] [refrains from] [rather, it slowly deconstructs] its sense of self into another and runneth then over [repeat ] drumming does a number on the clock chime - oh that Bickleton clock chime! - long dim.
My Sweet Euchabibilla Baboo, Electric Garbage, then the Aaronsbundler March in all its pomp triumphal and glory grandiose

nobody, but nobody
pomps triumphally and grandiosally like we does

slides knife into its groove

Even in the decade of chaos we make a remarkable sound. Keeping the rhythm lively - and all while
Karen was nursing the baby right there. Familial. Banned Rehearsal lullaby.

the human mouth is the cavernmyth of language, dragon's lair.

Incongruities joined by a near-common pitch
or by cooperative winding entwining
on the down low barest smallest of sounds
muttering with exactness into the big space around small sounds
guitar (neal) kicking the sound around on the floor
into hot spots where it glows in feedbacklight
improvisation: helping each other's sounds out. 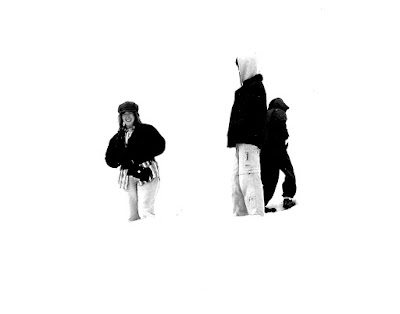 How many voices can be got to be seeming to be doing exactly the same thing, while all the while always doing entirely different things actually?

The Official Whiteman Tour Guide to Rhapsody in Blue, with favorite bits!

In celebration of the industrialization of the West. "prancin' dancin' stallion". poet he was at that.

Wisely does not make the song much more than a vehicle for the rhythm. In which the guitar riff neatly invokes a subtle cross-meter in 3.

Won't Get Fooled Again - The Who [from Who's Next]

There are some words in there inside the emphatic locution. How the words are spoken, not what the words speak. 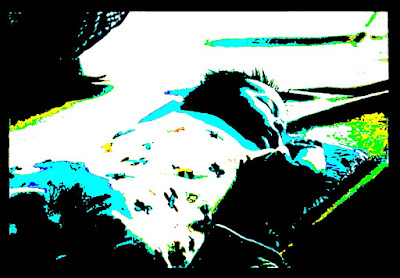 Wild Is The Wind - David Bowie [from Station to Station]

Picture an awful movie, just dreadful
the credits roll disconsolate
past the first credit roll song
everybody leaves
just then is where this song belongs
brilliant unexpected brilliance
"you touch me I hear the sound of mandolins" barfy song lyric lifted into incandescence.
I know he's just showing off, but this is one of my favorites.

Now with tape wobble! Me, in closet, gaveling.

All tapes begin with fuss
quite thin the sound of rattling big red bag of fun
with pre-recorded music layered in: My Chart, my Sonatina, Cantus
gentle sounds then the rhythm band cymbals
an apparent harmonic tendency upwards or not downwards
Toad Hall? probably. We'll say so.
my Sonata in 2 Movements
Such Words (must have been Neal's)
we all sing to baby

Posted by Keith Eisenbrey at 2:53 PM