I was reminded of keyboard virtuosi: Jelly Roll Morton or Liszt, in the seeming ability to be all parts of an imaginary ensemble at once, and of Arthur Rubinstein in that miraculous efficiency to do it all without moving his fingers. But it isn't just the mind-blowing technique, it's the poetry with which that imaginary ensemble is evoked - Art Tatum quicksilver magic. Thank you Dave Campbell for inviting Jim out to Seattle!


September 10, 2017
The March Before the Battell - William Byrd - Elizabeth Farr [from My Ladye Nevells Booke]

Phrase balancing balanced with energy release in overlapping sequences, each voice taking its turn to unwind.

We do not dissipate energy, we exhaust it.

More than a hint of that ol' razzle dazzle minstrel show showmanship. Theory: jazz landed in highbrow territory because it was so woke to its roots. Its aspirational trajectory had force behind it. So much of the old practice makes us uncomfortable (as it ought), but the musicianship is for real.

Already (1936) moving toward becoming a meta-music, journeying toward the abstract. See Theory above, its roots are its subject matter.

The arrangement is absolutely professional showman, but here, where the verbal portion is the point (gospel before music), the music portion sticks more firmly to the demotic, doesn't push forward to become its own thing.

Somewhere back there in time, a singing movie cowboy sensibility.

They nailed this one: overblown teen drama and their patented soft-porn harmonies. A heady mix.

Bargain - The Who [from Who's Next]

The parts of this song push against each other, far from working together they storm into separate rooms. But hey! they have a synth!

Using anger words to incite an angry energy then ride the wave. Sorry Iggy, this one just comes across as bad tempered.

Bach, Sinfonia from the C-minor Partita.

September 12, 2017
Banned Rehearsal 252 - Karen Eisenbrey, Keith Eisenbrey, Aaron Keyt [March 1991]
On a personal note, this was the last session before our first son was born. At Toad Hall, a pitchscape of surfaces. Metal. Drum. Bells. Folded. Hinged. Can-bottom Diaphragm. What might remain in that big red bag of fun? The rim of the brim can. Toot Chorus.

We stopped by in the afternoon to reconnoiter. Mostly it was pretty quiet except for a tiny chipmunk that barked at us for several minutes. Its little tail would jerk out with each bitty bark. Not much got on the recording but general wind noise. I did another recording while we took a short walk but had some audio problems. I'm not sure the B session is salvageable. 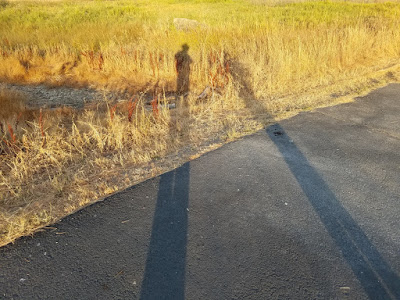 Back again the next morning, the birds were slightly more active, and the breeze was less. The B session was also a walk and also has some audio problems here and there, but not as bad as the day before. I think I recorded too hot. Be that as it may, it sure was chilly at that hour! The site is not entirely quiet of traffic noise, but it's pretty darn remote.

Posted by Keith Eisenbrey at 4:25 PM